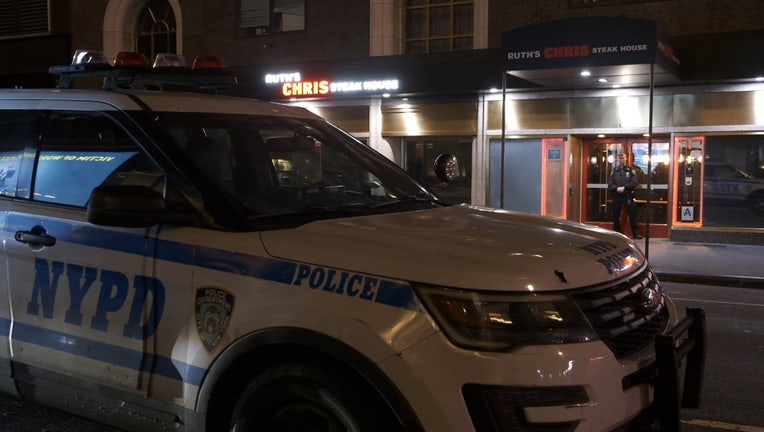 The NYPD is searching for two women after a stabbing inside a Ruth's Chris Steakhouse in Midtown Manhattan.

NEW YORK - The NYPD arrested a woman accused of stabbing a patron at Ruth's Chris steakhouse in Midtown Manhattan Friday night. It happened around 10 p.m. at the eatery as people were enjoying sizzling steaks and steaming baked potatoes

Patrons of Ruth's Chris were surrounded by police after a customer stabbed someone with her steak knife.

The NYPD says the situation escalated when a 24-year-old patron started arguing with an employee. They say 41-year-old Joan Thompson and her companion, seated at another table, overhead the argument and tried to intervene, but instead,

Thompson apparently got sucked into the squabble.

That's when police say Thompson suddenly reached for a steak knife and plunged it into the man's back.

Ruth's Chris employees told FOX 5 News that the 24-year-old was physically aggressive with Thompson and allegedly made some racial remarks.

Ruth's Chris released a statement to FOX 5 News stating: "We were shocked by the incident that took place inside our restaurant and are working with the New York Police Department to assist in any way possible. The safety of our guests and Team Members is paramount. We ask that all questions be directed to local authorities during their investigation."

The situation ended with Thompson allegedly fleeing, her bill unpaid, and the 24-year-old man at Cornell Medical Center.  He is said to be in stable condition and expected to survive.

NYPD officers found Thompson on Saturday.  The task was made easier because she had used her personal information to make a reservation.

She is charged with assault and menacing.