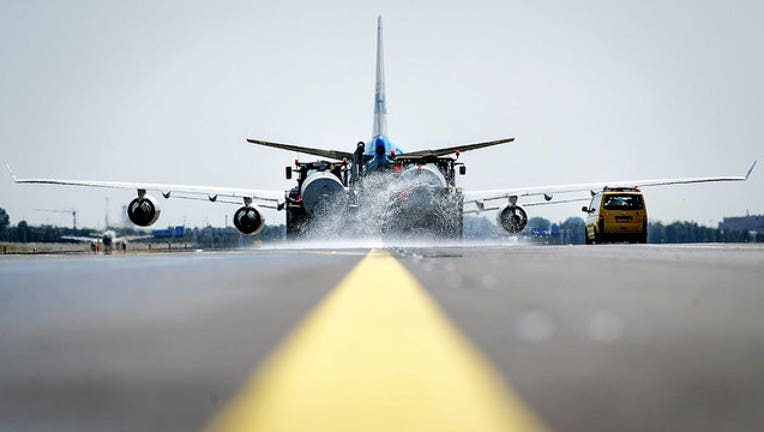 Water is sprayed on the taxiways at the Schiphol airport to prevent the deformation of the asphalt, due to heat wave on July 24, 2019. - (Photo credit ROBIN VAN LONKHUIJSEN/AFP/Getty Images)

THE HAGUE, Netherlands (AP) - Thousands of passengers flying to and from Amsterdam's Schiphol Airport faced delays and cancelled flights Wednesday due to problems refueling planes at the busy European aviation hub.

Airport spokeswoman Willemeike Koster said 180 flights were canceled at the airport just outside Amsterdam, stranding passengers at Schiphol and other airports. Field beds were being set up at the airport as a precaution in case passengers were forced to wait overnight for their flights, Koster told The Associated Press.

It was not clear how many passengers were affected by the delays and cancellations, but Koster said the number ran into the thousands.

The airport said a company that supplies fuel to planes at the airport has "a fault in their system. That means that planes cannot be refueled right now, which is causing delays." The airport said it was working with the company, Aircraft Fuel Supply, to try to resolve the problem.

"It is still unclear how long this will take, but we expect it to last long into the evening," Schiphol said. "We regret any inconvenience for travelers and airlines."

Only one-third of the usual number of flights was arriving at Schiphol on Wednesday night, Koster said. Even fewer were leaving.

"If they have enough fuel they can go," Koster said. "There are planes departing, but it is at a minimum level."

Dutch airline KLM said it was possible flights would be cancelled Thursday as well due to an "phased restart" of operations at the airport.

The fuel problem came during the busy summer vacation period in the Netherlands and on a day that saw a heat wave set a record high temperature. The Dutch weather service Weerplaza said the southern city of Eindhoven reported a temperature of 39.3 degrees C (102.7 F), the hottest day in the country in 75 years.

Airport spokesman Hans van Kastel told Dutch broadcaster NOS that the fuel issue was not believed to be linked to the hot weather.