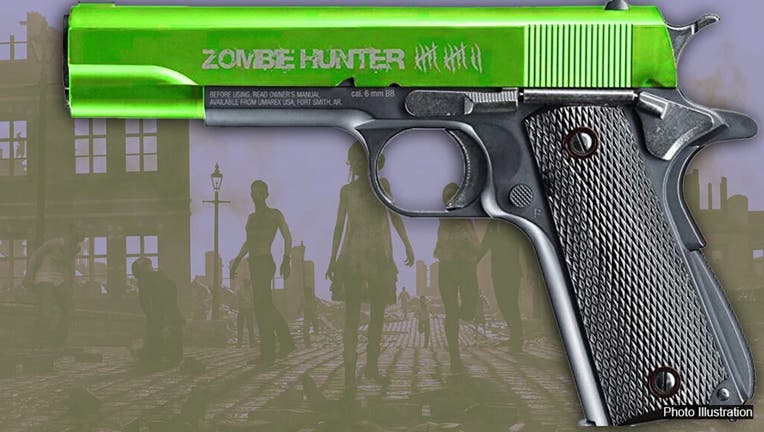 The toy gun was neon green and black with an orange tip featuring the words on the handle: “Zombie Hunter.” (Photo illustration)

A 12-year-old boy in Colorado reportedly got a five-day suspension for flashing a toy gun across his computer screen during an online art class.

The El Paso County Sheriff’s Office said although the teacher thought it was a toy gun, authorities still did a welfare check on Isaiah Elliott without parental notification.

“It was really frightening and upsetting for me as a parent, especially as the parent of an African-American young man, especially given what’s going on in our country right now,” Curtis Elliott, Isaiah’s father, told KDVR.

He said his son, who has been diagnosed with attention deficit hyperactivity disorder (ADHD) and has learning disabilities, wasn’t aware the gun was shown on screen in his distance learning.

“He was in tears when the cops came. He was just in tears. He was scared. We all were scared. I literally was scared for his life,” said Curtis Elliott.

“The virtual setting is not the same as the school setting,” the dad added. “He did not take the toy gun to school. He’s in the comfort of his own home. It’s a toy.”

The toy gun was neon green and black with an orange tip featuring the words on the handle: “Zombie Hunter.”