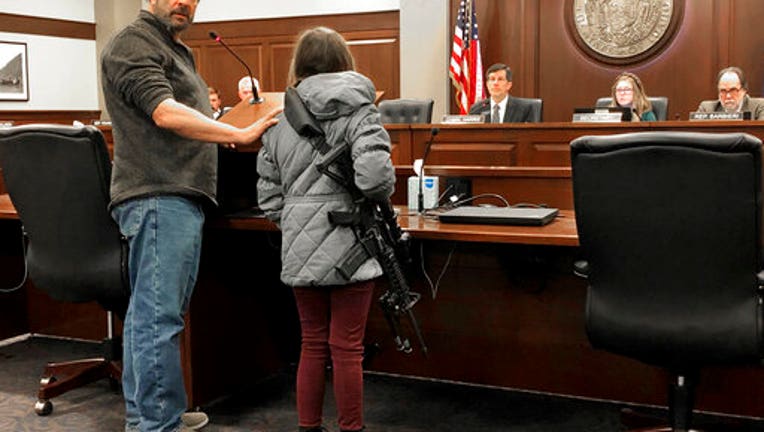 Charles Nielsen, 58, and his 11-year-old granddaughter, Bailey Nielsen, testify before a House panel at the Idaho Statehouse on Monday. Feb. 24, 2020 in Boise, Idaho. (AP Photo/Keith Ridler)

BOISE - An 11-year-old girl toting a loaded AR-15 appeared Monday at a legislative hearing with her grandfather, who is supporting a proposal that would allow visitors to Idaho who can legally possess firearms to carry a concealed handgun within city limits.

Charles Nielsen addressed the committee that voted to send the legislation to the full House as Bailey Nielsen stood at his side with the weapon slung over her right shoulder, but did not say anything.

“Bailey is carrying a loaded AR-15,” Charles Nielsen told lawmakers. “People live in fear, terrified of that which they do not understand. She's been shooting since she was 5 years old. She got her first deer with this weapon at 9. She carries it responsibly. She knows how not to put her finger on the trigger. We live in fear in a society that is fed fear on a daily basis.”

He said Bailey was an example of someone who could responsibly handle a gun, and lawmakers should extend that to non-residents.

“When they come to Idaho, they should be able to carry concealed, because they carry responsibly,” he said. “They're law-abiding citizens. It's the criminal we have to worry about.”

There was no notable reaction among lawmakers to the girl carrying the AR-15, and none asked Charlie Nielsen any questions after he testified. Guns are not an uncommon sight in the Statehouse when gun legislation is being debated, particularly handguns on belt holsters. Long rifles such as AR-15s also appear occasionally.

Some Idaho lawmakers are known to carry concealed weapons in the Statehouse. State Police patrol the Statehouse, and one and sometimes two are typically present at committee meetings where emotions can become strong.

Republican Rep. Christy Zito, who is proposing the measure opposed by the three Democrats on the House State Affairs Committee, said the legislation is intended to clear up confusion about state gun laws. Backers also say it will give people the ability to defend themselves if needed.

Idaho residents 18 and older are allowed to carry a concealed handgun within city limits in Idaho without a permit or training following a new law that went into place last summer. The legislation would extend that to any legal resident of the United States or a U.S. armed services member.

“I stand here before you today as a mother and grandmother who has had to use a firearm to defend their child,” Zito said. She said two men once approached her vehicle with her daughter inside.

“Even though I didn't have to pull the trigger, just the fact that they could see it, and they knew that I had it, was the determining factor,” Zito said.

Opponents say allowing teenagers to carry a concealed weapon without any required training within city limits is a bad idea and could lead to shootings. If the bill becomes law, Idaho would be among a handful of states that allow that type of concealed carry.