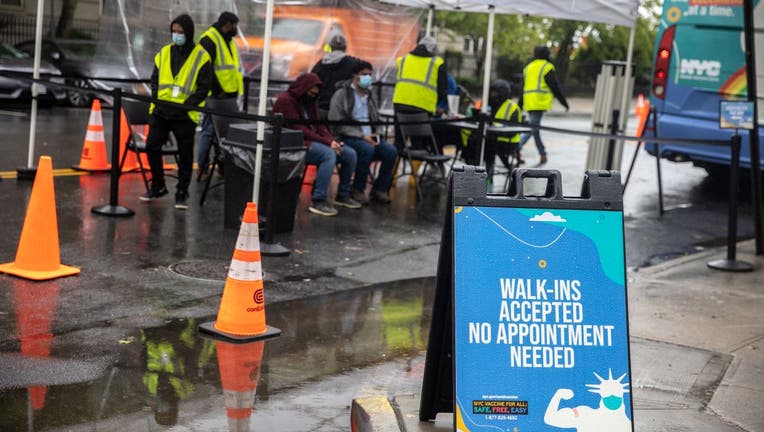 Signage is seen near a NYC mobile vaccination clinic bus near Brighton beach on May 29, 2021 in New York City. (Photo by Jeenah Moon/Getty Images)

NEW PALTZ, N.Y. (AP) - A 102-year-old Army veteran is comparing his World War II service to the campaign to vaccinate Americans against COVID-19 in a public service announcement released by officials in New York's Ulster County.

"When our nation needed us and Uncle Sam came calling, we answered. We fought the Nazis and stormed the beaches of Normandy," veteran Bill Swetow says in the video released Saturday by County Executive Pat Ryan. He adds, "And over 75 years later, we are at another moment where we need every American to do their part."

The Daily Freeman of Kingston reports that Swetow, who lives in New Paltz in the Hudson Valley, joined the Army after the attack on Pearl Harbor in 1941 and went on to serve as a cryptographer and a statistical control officer.

Swetow says in the minute-long PSA, "We are not asking you to fire a gun, dig a trench, or go to a foreign land. But we are asking you to join the fight, the fight against COVID-19. And we want you to get vaccinated."

The ad will air on local TV and radio stations as well as social media sites.