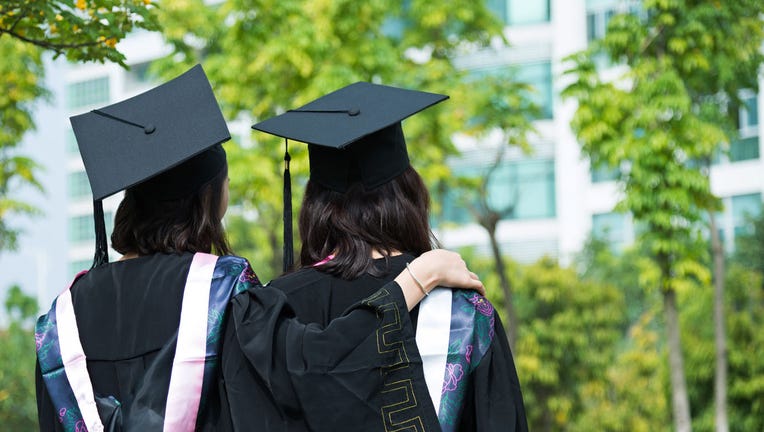 Schumer renewed calls for President Biden to cancel up to $50,000 in college debt for federal student loan borrowers. Here's what the Education Department has said about loan repayment. (iStock)

Senate Majority Leader Chuck Schumer (D-N.Y.) on Thursday again called on President Joe Biden to cancel up to $50,000 in federal student loan debt per borrower "with the flick of a pen."

During opening remarks for a virtual screening of a documentary series about the student debt crisis, "Scared to Debt," Schumer said that college debt makes it more challenging for young Americans to achieve financial milestones like becoming a homeowner, buying a car or even starting a family.

"For generations, higher education has been a ladder up into the middle class... but today, student debt is an anchor weighing too many down."

"Student debt makes it harder to achieve the American dream — the sacred promise that if you work hard and play by the rules, one day you're going to make it here in America," Schumer said.

Schumer belongs to a group of progressive Democrats, like Sen. Elizabeth Warren (D-Mass.), who have put pressure on the White House to enact student loan forgiveness measures via executive order per the Higher Education Act. During his campaign for president, then-candidate Joe Biden supported forgiving $10,000 worth of federal loans per borrower. However, his administration has not yet enacted such legislation.

BIDEN ADMINISTRATION HAS CANCELED $1.5B IN STUDENT LOANS VIA BORROWER DEFENSE

Secretary of Education Miguel Cardona said in a recent town hall that the Biden administration is still discussing the idea of "broad" student loan forgiveness. But House Speaker Nancy Pelosi has recently said that President Biden doesn't have the legal authority to forgive student loans and that student loan cancellation "has to be an act of Congress."

About 1 in 8 borrowers have privately-held student loan debt, according to EducationData.org, which means that millions of graduates would still owe college debt even if the Biden administration is able to enact student loan forgiveness legislation.

Student loan rates are near all-time lows, according to Credible data, which means it may be possible to lock in a lower interest rate on your college debt. Refinancing your private student loan debt to a lower rate may help you reduce your monthly student loan payments, pay off your debt faster and save money on interest over the life of your loans.

According to Credible's data, borrowers who refinanced to a longer loan term on Credible were able to lower their monthly payments by more than $250. And those who refinanced to a shorter term saved nearly $17,000 on interest over time and paid off their debt 41 months faster on average.

To see student loan refinancing rates from real lenders, check out the table below. You can also visit Credible to see your estimated interest rate without impacting your credit score.

How to know if student loan refinancing is right for you

Refinancing your student loans to a lower rate may be able to save you money on interest now and over time, but it's not right for everyone. For example, refinancing your federal student loans makes you ineligible for federal benefits like income-driven repayment plans, COVID-19 administrative forbearance and student loan forgiveness programs like PSLF.

If you have privately-held student loan debt, you don't risk losing access to these programs because you were never eligible for them. Also, student loan lenders aren't permitted to charge refinancing fees, so you have nothing to lose by refinancing to a lower rate and more favorable terms.

To learn more about student loan refinancing and to see if this option is right for you, get in touch with a knowledgeable loan officer at Credible.