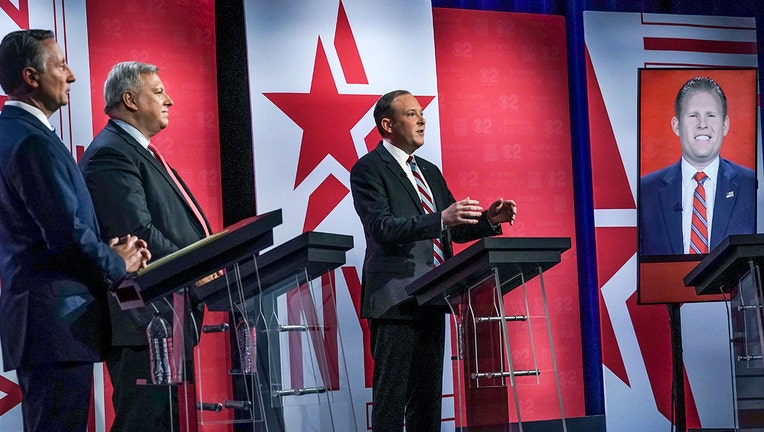 ALBANY, N.Y. (AP) - Four Republican candidates for New York governor pledged to undo years of one-party rule and focus on battling crime and improving the economy if elected to office during a televised debate Monday night.

It's an uphill battle for Republicans vying for the governor's office in New York, where registered Democrats outnumber registered Republicans by more than 2 to 1. The state's last Republican governor was George Pataki, who served from 1995 to 2006.

Giuliani, a former adviser to former President Donald Trump, said he was barred from participating in-person in the Monday primary debate because he refused to submit proof he's been vaccinated against COVID-19. He said he told debate organizers he would take multiple tests leading up to and on the day of the debate.

Giuliani said if elected, he will restore the jobs of public workers fired for not getting the vaccine. He pledged Monday to empower the police and called for a return to widespread stop and frisk policies in New York City.

In 2013, a judge ruled New York City police violated the constitution by stopping, questioning and frisking mostly Black and Hispanic people on the street en masse.

Astorino, a Republican former radio industry professional and two-term Westchester County executive, is running for governor for a second time. He's promised to release an agenda to address New York's steep job loss stemming from the COVID-19 pandemic on top of government corruption and the state's high taxes and cost of living.

Astorino said Trump "bears some responsibility" in the Jan. 6, 2021, insurrection but said it's time for the country to move on.

Zeldin, a Trump ally and an Army veteran who has represented New York's 1st Congressional District since 2015, has accused Democrats of being soft on criminals and overzealous in imposing safety protocols intended to fight COVID-19.

Zeldin touted his support from the National Rifle Association and said he wanted to repeal a 2013 state gun control law that broadened the definition of assault weapons and required universal background checks in part.

Businessman Harry Wilson, of Johnstown, entered the race this spring by launching a $12 million television advertisement campaign. He has worked for Goldman Sachs and founded a White Plains advisory firm, and also served as a U.S. Treasury Department advisor under former President Obama.

Wilson faced criticism for his Democratic ties, with Zeldin calling him a "never Trumper." But Wilson said Zeldin had asked him to run as his running mate, and vowed to use his private sector experience to end corruption in Albany.