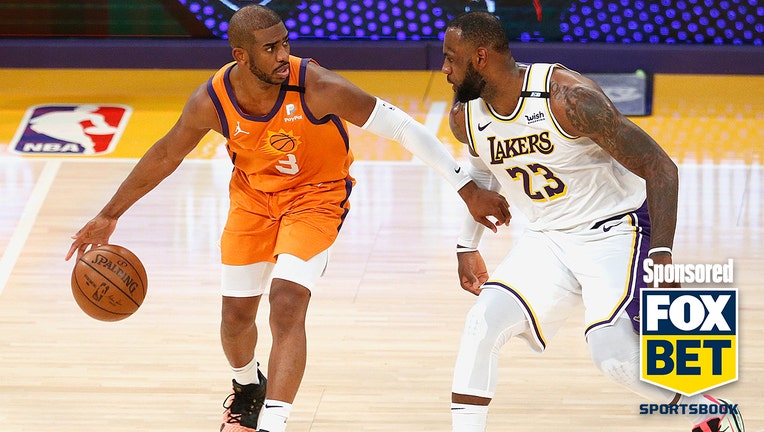 The betting price on which team will win the first-round playoff series between the Los Angeles Lakers and Phoenix Suns has been an absolute rollercoaster.

The combination of Phoenix’s Game 4 win and Anthony Davis’ groin injury has swung the series price from the Lakers being -900 favorites to the Suns now being favored at -175 (bet $17.50 to win $10). After one game!

"I don’t remember anything like this after four games in any series in any sport," longtime Las Vegas oddsmaker Dave Sharapan told me. "It was crazy when the Lakers opened -300 as a 7-seed. It was crazier when the books moved the Lakers to -900 after they went up 2-1. And now it’s the exact reverse with Phoenix favored in a 2-2 series tie.

"The volatility is insane."

Bookmakers opened the Suns as a 4.5-point favorite for Game 5 tonight, and the initial push came on Phoenix. The line moved up to -5 and is now Suns -5.5 at FOX Bet. The total for points is currently set at 208.

"The books opening the Suns -4.5 is them playing defense," Sharapan explained. "You could’ve put up -2.5 or -3.5 and maybe taken some Lakers money. But they hung -4.5 and the first few bets moved it out to -5 and -5.5. That tells me that Davis is either not playing or he really isn’t too good health-wise."

LeBron James is going to have to go nuclear with or without Davis. No more passing out of the post when Cam Payne is on him. No more drive and kicks to Alex Caruso so he can launch a 3-pointer off the side of the backboard. LeBron has to be the best player in the world if the Lakers are going to advance.

"He has to leap over tall buildings in a single bound," Sharapan joked. "He’s gotta be Superman. Carry the whole team. Play defense, make the stops. Hit all the shots. LeBron has to score 35 or 40 points. Does he still have that in his arsenal? I don’t think there’s enough." (FOX Bet is dealing James’ point prop at over/under 27.5, with -143 juice to the "Over." Thanks, but no thanks with that vigorish. Davis is not listed on any player props for Tuesday night.)

I still can’t wrap my head around this series price. I have never, ever seen a team morph from a -900 favorite after three games into a +140 underdog (bet $10 to win $14) after four. It almost feels like the sportsbooks are throwing darts. They're clearly entangled in an internal numerical battle because of LeBron’s 14-0 first-round record, Davis’ uncertainty and Phoenix’s home court edge.

That’s a lot to balance in the dark.

"With this current [series] number, the books are basically saying they don’t know what’s going to happen," Sharapan cracked. "They’re just looking to take bets, and they’ll move the price if need be. The status of Anthony Davis is really unknown. I don’t even think he’ll know if he can go until he tests it out before tip.

"Removing Davis makes it such an uphill battle," Sharapan continued. "It makes the Lakers look human. They have to win two out of three games, and they don’t have home court. They look mortal now.

"If I was a Laker backer, I would be pretty nervous. They have to win a game again in Phoenix. And if they don’t have Davis to help LeBron, it’s a tall task."

In some weird, roundabout way, the Suns' series price at -175 feels pretty cheap, considering they’ve got the extra home game and Davis is clearly nowhere near 100%. For comparative purposes, the Clippers and Mavericks are tied 2-2, with two of the three remaining games are in Los Angeles. That series price is Clippers -450 at FOX Bet, which is substantially higher than Suns -175 in the exact same situation.

Is LeBron really worth more than two dollars (the difference from -450 to -175) to a series price?

"Wow," Sharapan said before a pause. "I hadn’t thought about it that way.

"Obviously, there’s a LeBron factor in everything. He’s worth a whole lot. I think the Laker brand and all that stuff helps out, too. All I know is that I can’t wait to watch Game 5."

I’m going to bite the bait and take Lakers +5.5 tonight at FOX Bet. Let’s remember that the Suns were -2 at home in Game 1 and +1.5 in Game 2. Davis is extremely valuable, but is he really worth six to seven points?

My numbers say no. I don’t know if the Lakers will win, but I really like LeBron to keep it close.