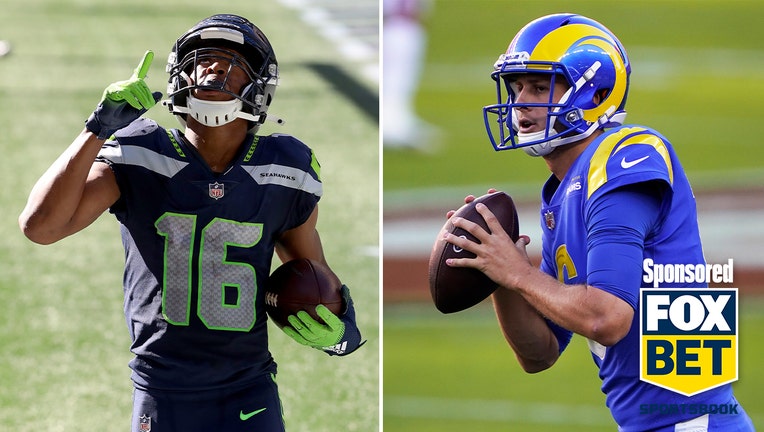 LEFT: Tyler Lockett #16 of the Seattle Seahawks celebrates in the end zone after scoring a touchdown against the Dallas Cowboys during the second quarter in the game at CenturyLink Field on September 27, 2020 in Seattle, Washington. (Photo by Abbie P

All season long, the motto out of Seattle has been “Let Russ Cook”. Perhaps the better idea would be to let Russell Wilson mix up a defense that can keep the Seahawks as a legitimate Super Bowl contender.

While the first half of the season in the NFC has been dominated by Wilson’s MVP caliber effort, the strains of a defense that is allowing 455.8 yards per game- the worst in the NFL- are beginning to show.

Things have to get corrected quickly for Seattle (6-2) to keep their lead in the NFC West. They travel to Los Angeles on Sunday afternoon to face the 5-3  Rams (4:25 PM ET, FOX) in a game that will shape the rest of the year in pro football’s best division.

The Rams are the complete opposite, holding teams to 291.9 yards in eight weeks, second only to Indianapolis in that number while holding teams to 19 points per game. That has propped up an offense that can shine with Jared Goff, but has been hampered with some inconsistency in the running game.

There are plenty of Custom Bets and Bet Boosts available at the FOXBet.com Sportsbook for you to choose upon. One of the best is a 4x your money bet that DK Metcalf will score a touchdown and the Seahawks will win the game.

The history
This will be the first meeting of the season between the two teams, with the second one scheduled for Seattle on Dec. 27. The Rams have won four of the last five games, splitting two games in 2019. Since the Rams returned to Los Angeles in 2016, they are 3-1 against the Seahawks and have held the Seattle offense to just 15.5 points per game.

The main storylines to watch
The story of Seattle is the story of Wilson, whose season totals are just about on par with anyone through eight games. He’s on a 5,000 yard, 56 touchdown pace. He has found his top receiver in Metcalf, who has 788 yards on 43 receptions and eight touchdowns. The running game besides Wilson has been held to just 117 yards per game, so this is a case of a player just carrying a team on his back. Keep that in mind if you are looking for a Prop Bet involving Wilson or the Seahawk offense.

On the flip side, the Rams life on the edge has been in games when Goff has struggled. In the last two losses by Los Angeles- at Miami and at San Francisco- Goff has thrown three interceptions and completed less than 60 percent of his passes.

Because of how dominant the Rams defense has been, it is easy to forget that Los Angeles is still dangerous on offense with Robert Woods, Cooper Kupp and Tyler Higbee all capable of big games receiving wise. On defense, Donald has nine sacks and 11 tackles for loss.