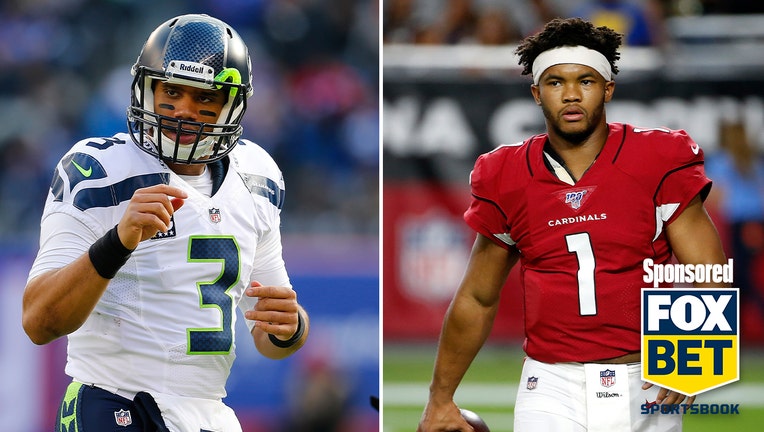 LEFT: Russell Wilson #3 of the Seattle Seahawks in action against the New York Giants at MetLife Stadium on December 15, 2013 in East Rutherford, New Jersey. The Seahawks defeated the Giants 23-0. (Photo by Mike Stobe/Getty Images) RIGHT: Quarterback

When Kyler Murray’s arcing Hail Mary pass fell into DeAndre Hopkins hands on Sunday afternoon, it was a prayer from above for the Arizona Cardinals.

It also helped set the landscape for an NFC West race that figures to be wild right up until the final week of the 2020 National Football League season.

The Cardinals took hole of one spot in a three way tie with the Seattle Seahawks and Los Angeles Rams in the tightest divisional race in the sport. And now, the race is on to determine a champion with the final stretch starting on Thursday night when Murray and the Cardinals face Russell Wilson and the Seahawks on Thursday Night Football (8 p.m., FOX).

There are plenty of Custom Bets and Bet Boosts available at the FOXBet.com Sportsbook for you to choose upon. One of the best is DeAndre Hopkins, Christian Kirk and Larry Fitzgerald all scoring touchdowns. That bet has a +1900 return.

The history
This is the second matchup of the season between the two. The first was a wild 37-34 overtime victory for the Cardinals in Arizona that was highlighted by Murray leading the Cards to 10 points in the final 2:28 to force the extra session. Arizona has won the last two meetings- including a 27-13 win in Seattle last December. The two teams have split the lifetime series at 21-21 with one tie.

The main storylines to watch
Four weeks ago, Seattle looked like the odds-on favorite to have home field advantage in the NFC and to be the representative in the Super Bowl. So what has happened? Well, there’s three road losses that have exposed Seattle’s weak defense on the back end. The second part is Wilson has been forced to be a level above superhuman – and while he has been that to this point, it is still asking a lot for the offense to keep carrying the Seahawks every week. Yet, they still continue to put up a ton of points and post a ton of stats on that side of the ball. That makes the over-under number an attractive proposition.

Meanwhile, the Cardinals are the team that America has finally woken up to in that stretch. The Hail Mary pass from Murray to DeAndre Hopkins to beat the Bills is the glitz, but the offense that Murray and Kliff Kingsberry have put together is dynamic and highly potent. Like Seattle, the Cardinals have some defensive issues- they have allowed over 30 points in three straight games- but they are probably a little more balanced. Prop bets involving Murray, Hopkins and Fitzgerald will be a hot commodity.