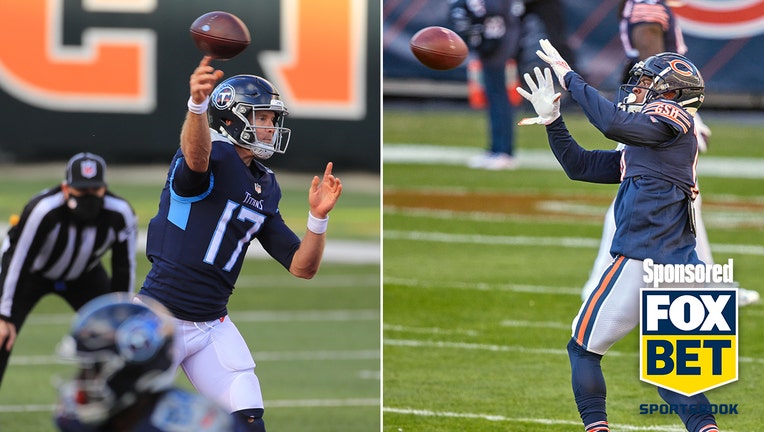 LEFT: Tennessee Titans quarterback Ryan Tannehill (17) passes the ball during the game against the Tennessee Titans and the Cincinnati Bengals on November 1, 2020, at Paul Brown Stadium in Cincinnati, OH. (Photo by Ian Johnson/Icon Sportswire via Get

Two weeks ago, Tennessee Titans quarterback Ryan Tannehill was the quarterback of one of two undefeated teams remaining in the AFC.

At the same time, Nick Foles was turning on that old “Philly, Philly” charm in leading the Chicago Bears into a force in the NFC North.

On Sunday at Nissan Stadium in Nashville (1 p.m., FOX), these two teams suddenly find themselves in almost must-win situations in trying to end two game losing streaks and stick within striking distance of their division leads.

And you can place a wager on the action with a bet on FOXBet.com – the best place to find the latest odds, prop bets and bet boosts. Check it out now for special promotions when you open an account. FOXBet is available in Pennsylvania, New Jersey and Colorado through the Fox Bet app and online at FOXBet.com.

There are 48 Custom Bets available at the FOXBet.com Sportsbook for you to choose upon. Our personal favorite is a prop bet that would have both Titans running back Derrick Henry and Bears rusher David Montgomery each scoring two touchdowns. That bet has +1500 odds. Henry is also a great choice for scoring the first touchdown +350. Check out all of them at the FOXBet.com Sportsbook app.

There’s not much history between these two teams, given they play every four years because they are in opposite conferences. This will be the 13th meeting between the two franchises dating back to the Titans time as the Houston Oilers. Each team has six wins. The last meeting in 2016 saw Henry score a touchdown in the Titans’ 27-21 win in Chicago.

How quickly things have changed for the Titans, who were rolling before meeting up with the Steelers in a battle of undefeated teams in Week 7. After falling by a 27-24 margin in that one, they followed with a stunning 31-20 clunker to the Bengals on the road last week. One of the bright spots, however, has been Tannehill, who has thrown 11 touchdown passes and just two interceptions over the last four games. Henry has also had three strong games, but the Titans had trouble stopping the Bengals last week and need to play better if they are going to hang on to the AFC South lead from Indianapolis.

Meanwhile, Foles has been a strange case. His numbers have not been great – in his last five games, Foles hasn’t broken 300 yards passing. And yet, the Bears are usually in every game they play. They are only scoring 20.1 points per game and allowing 20.8 points. And yet, they are riding Allen Robinson, Montgomery and a decent defense right on the heels of the Green Bay Packers in the NFC North. If the offense gets more dynamic, this could be a dangerous team in. the second half of the year.