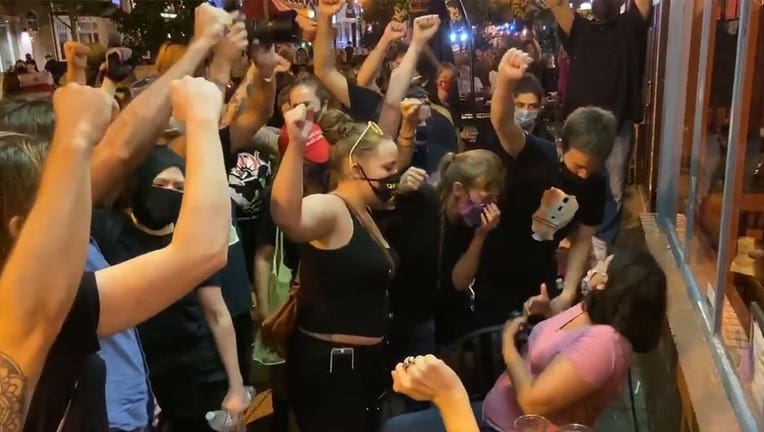 In one of the videos shared on Twitter Tuesday by Washington Post reporter Frederick Kunkle, a large group of protestors crowd around a woman sitting outside of a restaurant in Adams Morgan, shouting: "No justice, no peace" and "White silence is violence!"

Kunkle wrote that the confrontation stemmed from a Black Lives Matter protest that began in Columbia Heights, adding that protesters demanded that white diners show their solidarity by putting up a fist.

The woman in the video, who Kunkle says he later interviewed, told him that she "felt like I was under attack" for reportedly refusing to raise her fist in solidarity. Kunkle added that the woman told him she felt "there was something wrong about being coerced to show support."

She went on to tell Kunkle that she supports the protesters and had been marching with them for weeks.

Meanwhile, a similar scene played out in front of Mezcalero Cocina Mexicana on 14th Street NW. Another video shared on Twitter appears to show a group of protestors confronting a couple seated outside the restaurant who do not appear to raise their fists.

Attempts to reach the people we could identify in the videos weren’t immediately successful.