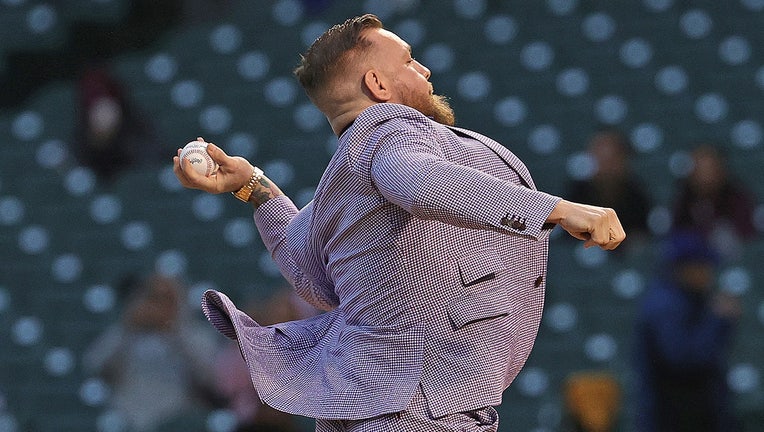 Conor McGregor throws out a ceremonial first pitch before the Chicago Cubs take on the Minnesota Twins at Wrigley Field on September 21, 2021 in Chicago, Illinois. (Photo by Jonathan Daniel/Getty Images)

CHICAGO - Conor McGregor might want to stay off the baseball diamond and stay in the ring.

The UFC superstar was in the Chicago area to surprise student athletes as part of a "Making a Difference On and Off the Field" campaign.

Three of the kids were given tickets to a Chicago Cubs game and a check to donate to their favorite charity.

McGregor was given the opportunity to throw out the first pitch Tuesday night as part of the visit.  Let's just say that the pitch was a bit outside.

He took to the mount in his suit, cocked his arm, and fired.

The ball went nowhere near home plate and hit the wall in front of the seats before ricocheting up the first base line.  Cubs player Patrick Wisdom, who was behind the plate to catch the pitch, looked shocked as the ball flew by him.

People in the crowd were heard laughing.