Video shows a vehicle on the second floor of the South Shore Plaza mall in Braintree, Massachusetts, on August 18, after an elderly driver went through an automatic door, reports said. (Credit: @Thary17 via Storyful)

An elderly woman driving an SUV found herself on the second floor of a Massachusetts mall Thursday morning and it was captured on video.

Shoppers were shocked to see a Lincoln MKX SUV slowly making its way past stores inside South Shore Plaza located in Braintree, Massachusetts.

Video shared on social media showed the SUV stopped in front of a clothing store as a person can be heard saying, "Like, she literally has to drive from all the way down there to over here." 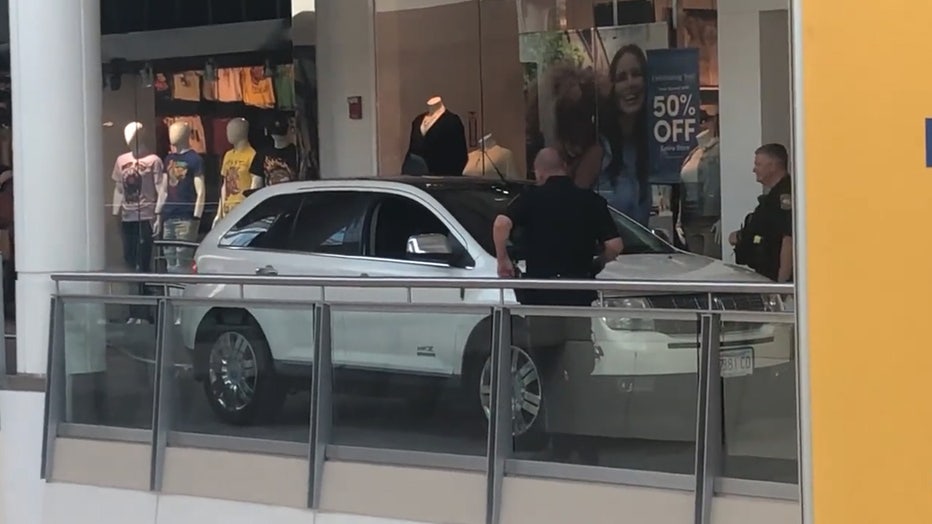 FILE - Freeze frame from video showing an SUV being backed out of a Massachusetts mall Thursday morning. (@ghettova via Storyful)

One witness told local news media that she was on her phone when she suddenly heard a female security officer screaming, "Stop! Stop! Stop!"

"I was walking around and talking to someone on the phone at the time when I heard the security lady start screaming, ‘Stop! Stop! Stop!,’ and by the time I got up to the window, I realized there was a Lincoln SUV," Squishables Store Manager Stacy Bartko told 7News Boston.

The driver, who was only identified as an elderly female, stopped the car and was evaluated by police and a mental health clinician at the scene before she was transported to a nearby hospital, according to 7News.

The vehicle was able to make entry into the mall only because a safety bollard was missing from in front of the entrance due to a recent accident, police told local news outlets.

Police back out SUV from inside Massachusetts mall

Video shows a vehicle on the second floor of the South Shore Plaza mall in Braintree, Massachusetts, on August 18, after an elderly driver went through an automatic door, reports said. (Credit: @ghettova via Storyful)

Police backed the car out of the mall and no one was injured in the incident.

Storyful contributed to this report. This story was reported from Los Angeles.