Police in England released this video compiled from a dashboard camera and body-worn cameras showing a vehicle pursuit and then arrests with the help of a Belgian Malinois police dog.

WOLVERHAMPTON, England - Police have released a dramatic video showing a vehicle chase through the streets of a city in England concluding with a police dog-assisted arrest.

The video, compiled from a police car's dashboard camera and officers' body-worn cameras, chronicles a pursuit and arrests that happened late last year. The footage starts with the POV from the police car cruising through the streets of Wolverhampton, England, on Nov. 11, 2020.

Authorities said burglars ransacked a convenience store, stealing tobacco products, alcohol, and cash in the early hours of the day.

Shortly after the break-in, officers in a patrol car spotted a car that had been reported stolen a few days earlier and went after it, police said.

During the chase, the driver of the stolen Ford Fiesta ran several red lights and hit 100mph in 30mph zones, police said. The suspected thieves tossed tools and stolen bottles of booze out the window toward the police car, authorities said.

Then the car zoomed the wrong way along a divided road "and thought he'd given his police pursuers the slip," police said in a news release. "However, the officers' local knowledge led them to the car's dumping ground where they were arrested."

The officers quickly busted the driver, Morgan McTaggart, 20, and one accomplice, Ashley Greatrex, 18, authorities said. Two other suspects scaled a fence and ran into a scrap-metal yard.

"She tracked a scent from the fencing into the yard. There must have been around 100 cars in there but she was paying particular attention to one row," Benton said. "I couldn't see anything but she was insistent."

So Benton then followed Pancho to one car in particular that drew her attention.

"Pancho jumped on the bonnet of one of the cars and started indicating at the door," Benton said. "That's when I spotted a pair of legs sticking out from underneath a pile of car seats."

One suspect emerged, claiming he was a 13-year-old kid. But police later learned he was a 20-year-old man named Callum Hopson, who has a long rap sheet.

"His 26-year-old brother Jamie [Hopson] also crawled from his hiding place knowing it was only a matter of time before Pancho notched up another find," police said. 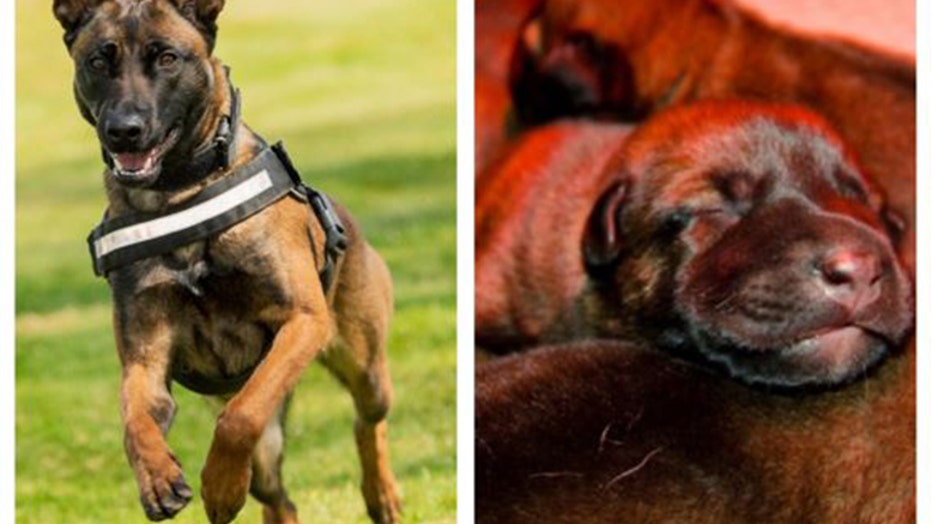 Pancho, a police dog in England, seen as a puppy (right) and more recently. The Belgian Malinois is named in honor of a detective who died in 2018. (Courtesy of West Midlands Police)

The four men later admitted to burglarizing the store. They pleaded guilty to various charges.

On Monday, March 22, 2021, a judge sentenced them to various terms behind bars.

Pancho is named after Andrew Taylor, a police detective who died in 2018. Why "Pancho"? That was Taylor's nickname among his fellow cops at the West Midlands Police.

This story was produced in New York City with Storyful.