Two women are suing Apple over its AirTags, claiming the trackers made it easier for them to be stalked and harassed.

NEW YORK - Two women are suing Apple over its AirTags, claiming the trackers made it easier for them to be stalked and harassed by their exes.

The proposed class action lawsuit, which was filed Monday in San Francisco federal court, involves a Texas woman and a New York woman. Each are seeking unspecified monetary damages, alleging the device was used by their exes to track their whereabouts.

Apple launched the AirTag last year. The small Bluetooth locator helps users find items such as keys, wallets or anything important that you don't want to lose through a digital imprint.

It works through the find my phone app technology on Apple devices. Ultimately, anything with the AirTag on it can be found digitally on a map. 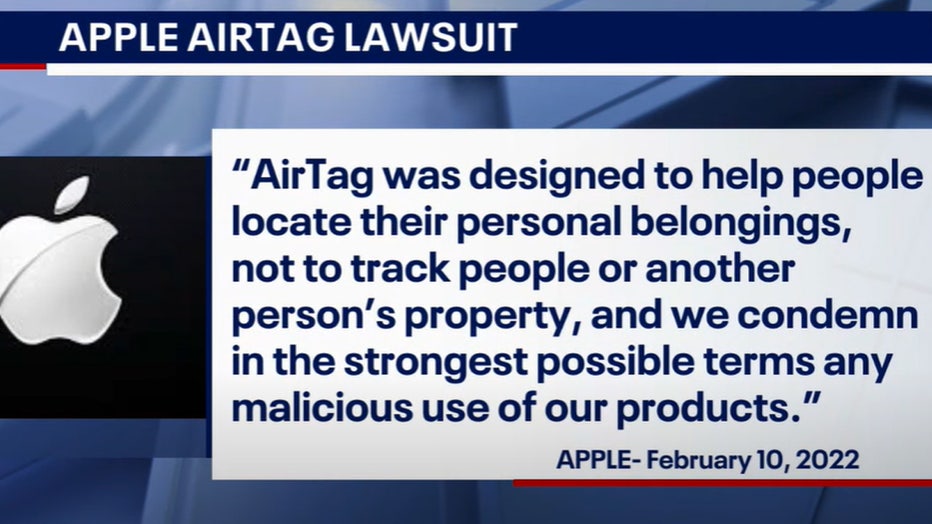 Reports of people misusing AirTags has come up in the past. In a statement back in February, Apple said, "AirTag was designed to help people locate their personal belongings, not to track people or another person's property, and we condemn in the strongest possible terms any malicious use of our products."

"If these plaintiffs are able to prove that Apple was somehow negligent in designing these products, and now they have been misused, then these individuals may be successful with their lawsuit.

But Ansari when on to say that, "Apple's strongest defense is that if individuals misused this product, then they're not liable for that. So if someone's ex-boyfriend or ex-husband has used these tracking devices to stalk or somehow harass an individual, an ex-wife or ex-girlfriend, then Apple may have no liability."

Earlier this year, Apple refined the product, adding more safety features, to prevent this kind of thing from happening.