Two officers were shot during an encounter with an armed man in the Bronx, the NYPD said. One officer has been released from the hospital. The other will remain there for a few days.

NEW YORK - An NYPD officer who was shot while confronting an armed man in the Bronx was released from a hospital Thursday, while a second officer wounded by the same gunman remained hospitalized, authorities said.

"I'm good, thank you," she told reporters as she got into a van. "Happy Thanksgiving."

She and the other wounded officer, Robert Holmes, is expected to recover fully.

In a press conference Wednesday night, Police Commissioner Dermot Shea said that just after 8 p.m., the NYPD received a 911 call that there was a man with a gun at Beaumont Avenue and 187th Street in the Belmont section of the Bronx, near Arthur Avenue.

One of the officers shot by a gun-wielding suspect in the Bronx on Wednesday night is now out of the hospital, with her partner expected to make a full recovery.

Two officers reportedly arrived on the scene and immediately encountered a man matching the description sitting on the front stoop of a building. One of the officers ordered the man to take his hands out of his pockets, police said. The man on the stoop then pulled out a semiautomatic pistol and began shooting at the cops, police said.

Jacobs, who had been with the department for just one year, was shot twice in the upper right arm, Shea said. She returned fire, striking the gunman three times.

Holmes, who has been on the force for about eight years, struggled with the gunman and was shot in the armpit before wrestling him to the ground.

All three were taken to St. Barnabas Hospital.

Holmes will likely spend a few days in the hospital, according to Shea.

The suspect underwent surgery and is also expected to recover, police said.

Police said the gunman was armed with a Ruger handgun, which they recovered at the scene. Officials said the handgun was reported stolen in Georgia last year.

"Another example of a gun from out of state comes into our city, hurts a New Yorker," Mayor Bill de Blasio said. 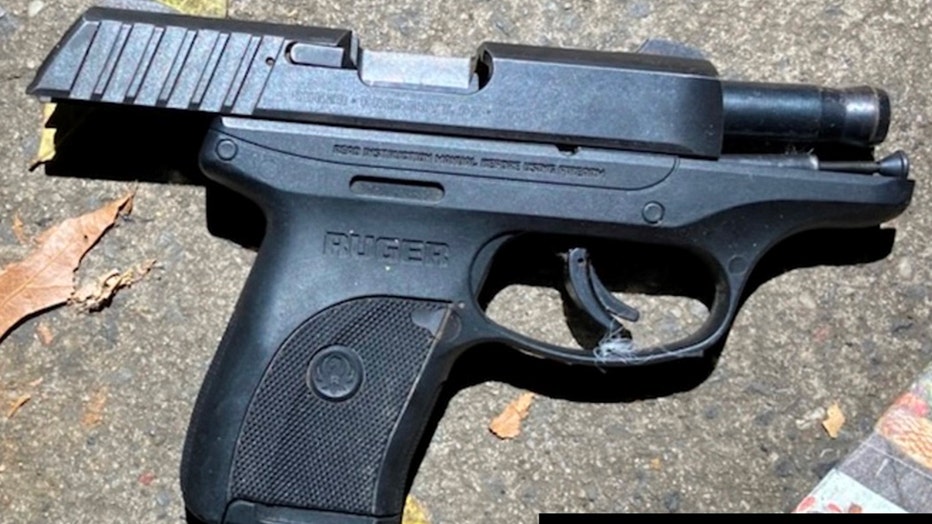 "You have two New York City Police Officers at 8 o'clock in the evening on Thanksgiving Eve, walking up to an individual, in uniform, on a Bronx street, and immediately that individual takes out a gun and starts shooting," Shea said in a press conference after the shooting. "If that doesn't tell you we have to take a second look, there is no fear on the streets right now."

"We can take guns off the streets and fill up truckloads, until we start putting some of these individuals in jail, we're going to have a tragedy," Shea said. "We had a 13-year-old shot yesterday, it was the same story."

NYPD holds presser after two officers shot in the Bronx

The NYPD holds a press conference after two officers were shot in the Bronx on Wednesday evening.