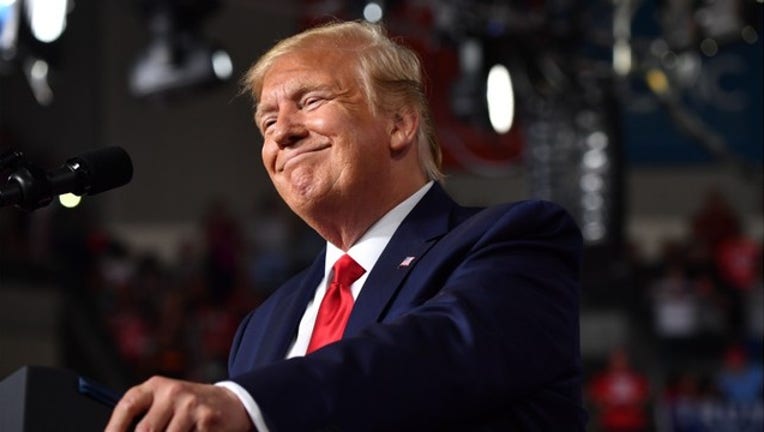 WASHINGTON (AP) - Call it the diplomacy of coercion.

The Trump administration is aggressively pursuing economic sanctions as a primary foreign policy tool to an extent unseen in decades, or perhaps ever. Many are questioning the results even as officials insist the penalties are achieving their aims.

Since taking office in January 2017, President Donald Trump has used an array of new and existing sanctions against Iran, North Korea and others. His Treasury Department, which oversees economic sanctions, has targeted thousands of entities with asset freezes and business bans. The State Department has been similarly enthusiastic about imposing its own penalties: travel bans on foreign government officials and others for human rights abuses and corruption in countries from the Americas to the Middle East, Africa and Asia.

At the same time, the administration is trying to reduce greatly the amount of U.S. foreign assistance, notably cutting money to Latin America and the Palestinians. The White House budget office is making plans to return billions of dollars in congressionally approved but unspent dollars to the Treasury. A similar effort was rejected by Congress last year.

The combination of more sticks and fewer carrots has created a disconnection between leveraging the might of America's economic power and effectively projecting it, according to experts who fear the administration is relying too much on coercion at the expense of cooperation.

It also has caused significant tensions with American allies, especially in Europe, where experts say a kind of sanctions fatigue may be setting in. The decision this past week by the British territory of Gibraltar to release, over U.S. objections, an Iranian oil tanker that it seized for sanctions violations could be a case in point.

It's rare for a week to go by without the administration announcing new sanctions.

On Thursday, the administration said it would rescind the visas of any crew aboard the Iranian tanker in Gibraltar. On Wednesday, Sudan's former intelligence chief received a travel ban. Last week, the entire Venezuelan government was hit. More than 2,600 people, companies, ships and planes have been targeted so far since Trump took office.

She and proponents of the administration's foreign policy say sanctions are working and have denied Iran and its proxies hundreds of millions, if not billions, in dollars in revenue used for destabilizing activity in the Middle East and beyond. And, they note, the U.S. approach does not involve the vastly more expensive option of military action.

"Overuse of economic warfare is certainly a better alternative to the overuse of military warfare," said Mark Dubowitz, the chief executive of the Foundation for Defense of Democracies. He has advocated for even broader sanctions.

Mandelker, whose office is in charge of economic sanctions, says sanctions alone "rarely, if ever, comprise the entire solution to a national security threat or human rights or corruption crisis." They must, she said in a speech to the Center for Strategic and International Studies, be accompanied by other action to push U.S. national interests.

Experts say the administration has not shown great vision in adopting strategies that do not rely on sanctions or separating punitive foreign policy decisions from purely trade issues, such as the spat with the Chinese over tariffs. While Trump has been reluctant to punish Russia for meddling in the 2016 presidential election, his administration has not relented on sanctions for Moscow's actions in Ukraine and human rights issues.

"President Trump has completely conflated economic sanctions and commercial policy," said Gary Haufbauer, a senior fellow with the Peterson Institute for International Economics who was a senior treasury official during the Carter administration. He said that while that approach might work with countries such as Mexico and Guatemala over immigration, trade measures and sanctions against China and Russia do not.

"I don't see that the U.S. is having any positive effect on Chinese behavior, or for that matter, Russia," Haufbauer said. He said this was a "pivot point" in world economic relations, with the U.S. losing its leadership role and opening up the possibility for another nation to pick up the mantle. Asian countries, he said, are deferring to China's perspective on the U.S., and American alliances with European nations are being weakened by Trump's reliance on sanctions.

"The U.S., through its trade policy, has managed to isolate itself," he said.

Although many administrations have relied on sanctions, Trump has used them with zeal at a cost to the U.S., said Liz Rosenberg, the director of the Energy, Economics and Security Program at the Center for a New American Security. She was a senior adviser to one of Mandelker's predecessors at Treasury during the Obama administration.

Where the U.S. once coordinated with Europeans on issues such as counterterrorism and nuclear nonproliferation, Trump's sanctions are often one-sided and do not prioritize partnerships, Rosenberg said.

The result is that many countries are less eager, or in fact wary, of signing up for American initiatives, particularly when they see the U.S. retreating in areas such as foreign aid. The administration is expected to present a plan soon to cut as much as $4 billion in economic and development aid, drawing wide bipartisan rebukes from Capitol Hill. A similar effort was turned aside in 2018, but there are fears it may to come to pass this year.

"Once again, the Trump administration is hell bent on slashing programs that lift millions out of poverty, turn the tide against deadly diseases, strengthen our economy, and make America safer," said Tom Hart, the North America executive director for The ONE Campaign, which supports development assistance. "Not only does this undermine U.S. leadership around the world, it subverts Congress' power of the purse."