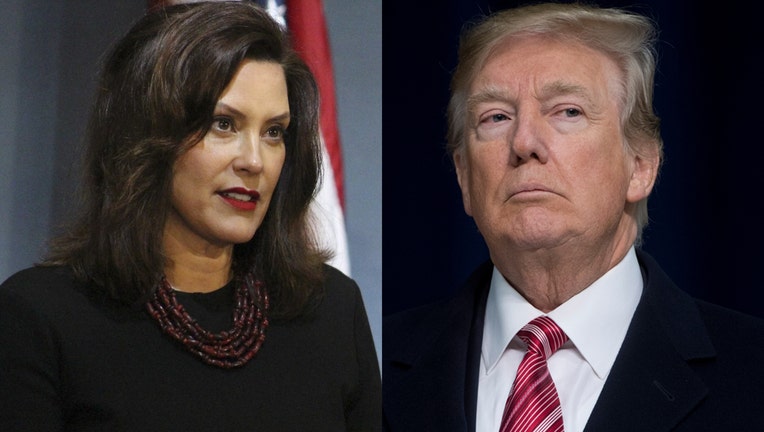 SOUTHFIELD, Mich. (FOX 2) - President Donald Trump has responded to last Friday's ruling by the Michigan Supreme Court that Governor Gretchen Whitmer's executive orders since the end of April were invalid, calling it a 'BIG win'.

Shortly after 9 a.m. on Wednesday, Trump retweeted a video from the group Young Americans for Liberty of Whitmer speaking during Tuesday's press conference from Lansing.

Whitmer started her press conference defending her COVID-19 executive orders to take action to protect Michigan residents. She said that the state Supreme Court ruling could put the state at risk of more cases and harm the economy more overall.

In his retweet, the president said the decision was a big win and encouraged schools and churches to reopen to open, while also thanking himself for auto companies expanding in the state.

"We just got a BIG win for the people of Michigan. Open up your Churches and your Schools. Auto companies pouring in and expanding (thank you Mr. President!). Have fun!"

The Supreme Court ruled that, while the Democratic governor followed the 1945 law enacted, the grounds on which she was extending the state of emergency was invalid.

She's made 180 executive orders since then, acting under two laws dealing with a governor's executive powers.

Any future COVID-19 orders will now include the Republican-led legislature, which is currently on October break.

"Mr. President, millions of hardworking Americans are relying on you for a COVID-19 relief package. Get to work," she tweeted - referencing the news from Tuesday that Trump had called off stimulus talks until after the election.

The governor and president have been at odds all year over the best way to handle the virus. Whitmer called on Trump to issue a federal mandate on face masks in July, which the president never did and he was rarely seen wearing one. In May, the president toured a Ford facility in Ypsilanti that was making ventilators and was seen not wearing a mask. He said that he had one and wore it when the cameras were not on.

In September, Whitmer said the president is the 'biggest threat to the American people' for the way he has handled of COVID-19.