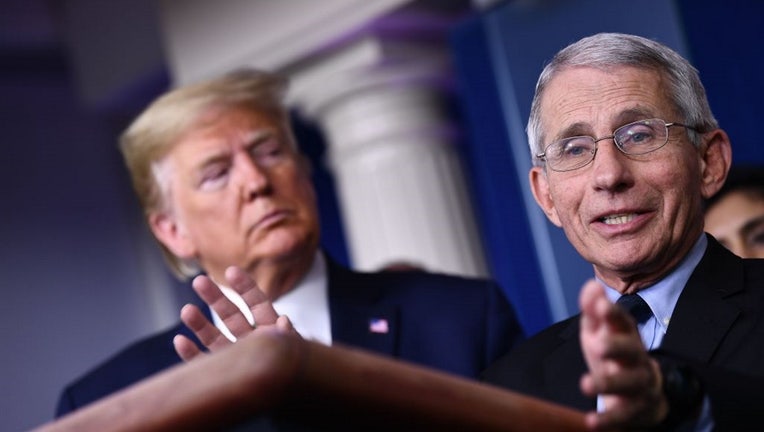 Dr. Anthony Fauci speaks as US President Donald Trump listens during the daily press briefing on the Coronavirus pandemic situation at the White House on March 17, 2020 in Washington, DC. (Photo by BRENDAN SMIALOWSKI/AFP via Getty Images)

Trump was facing intense pressure to turn around his campaign, hoping for the type of last-minute surge that revived his candidacy four years ago and plunging into an aggressive travel schedule despite the pandemic. But his lack of a consistent message, the surging virus cases and his attacks on experts like Dr. Anthony Fauci could undermine final efforts to appeal to voters outside of his most loyal base.

Speaking to campaign aides on a conference call, Trump said he believes he's going to win, allowing that he didn't have that same sense of confidence two weeks ago when he was hospitalized with COVID-19. One week since returning to the campaign trail, where his handling of the pandemic is a central issue to voters, Trump blasted his government's own scientists for their criticism of his performance.

RELATED: Florida among 10 states that allow ballots to count if voters die before Election Day

The president also declared the government's top infectious disease expert “a disaster.” But Fauci is both respected and popular, and Trump suggested firing the doctor would only create greater controversy. Trump's rejection of scientific advice on the pandemic has already drawn bipartisan condemnation.

Fauci, in an interview with CBS's “60 Minutes” that aired Sunday, said he was not surprised that Trump contracted the virus after he held large events with few face coverings. Fauci also objected to the president's campaign using his words in a campaign ad.

“I was worried that he was going to get sick when I saw him in a completely precarious situation of crowded, no separation between people, and almost nobody wearing a mask,” Fauci said of the president.

Trump held his call with campaign staffers from Las Vegas, where he was on the third day of a western campaign swing. He was to hold Arizona rallies in Prescott and Tucson later in the day before returning to the White House.

The president's professed confidence stood in contrast to his public comments in recent days reflecting on the prospect that he could lose.

“If Crazy Joe becomes president, it’s not even conceivable,” he told a rally crowd in Janesville, Wisconsin, over the weekend. “Running against him, it puts such pressure because I’m running against the worst in the history. ... If I lose, I will have lost to the worst candidate, the worst candidate in the history of presidential politics. If I lose, what do I do? I’d rather run against somebody who’s extraordinarily talented, at least, this way I can go and lead my life.”

Last week, Trump asked a crowd in Macon, Georgia: “Could you imagine if I lose my whole life? What am I going to do? I’m going to say I lost to the worst candidate in the history of politics, I’m not going to feel so good. Maybe I’ll have to leave the country. I don’t know.”

On Sunday, he expressed confusion that he could possibly be tied with Biden in Nevada — where polls actually show Trump trailing.

“How the hell can we be tied?” he said at a rally in Carson City. “What’s going on? ... We get these massive crowds. He gets nobody. And then they say we’re tied. ... It doesn’t make sense.”

RELATED: 'Our house is on fire': Suburban women lead charge in 2020 election

In Carson City, Trump addressed thousands of supporters who sat elbow to elbow, cheering him and booing Biden and the press. The vast majority wore no masks to guard against the coronavirus, though cases in the state are on the rise, with more than 1,000 new infections reported Saturday. The Republican president, as he often does, warned that a Biden election would lead to further lockdowns and appeared to mock Biden for saying he would listen to scientists.

Biden, meanwhile, was in Delaware for several days of preparation ahead of Thursday's final presidential debate. His running mate, California Sen. Kamala Harris, was returning to the campaign trail after several days in Washington after a close adviser tested positive for the coronavirus.

In addition to public polling that indicates Biden has an edge, the former vice president enjoys another considerable advantage over Trump: money.

Trump raked in $12 million during a fundraiser Sunday afternoon at the Newport Beach home of top GOP donor and tech mogul Palmer Luckey, which also featured a performance by the Beach Boys.

But over the past four months, Biden has raised over $1 billion, a massive amount of money that has eclipsed Trump's once-overwhelming cash advantage.

That's become apparent in advertising, where Biden and his Democratic allies are on pace to spend twice as much as Trump and the Republicans in the closing days of the race, according to data from the ad tracking firm Kantar/CMAG.

“We have more than sufficient air cover, almost three times as much as 2016," said Trump campaign manager Bill Stepien, who insisted Trump had the advantage with the campaign's field staff and data targeting.

Though Trump has pulled back from advertising in Midwestern states that secured his 2016 win, he's invested heavily elsewhere, including North Carolina, where he is on pace to slightly outspend Biden in the days ahead.

In Nevada, which Trump came close to winning in 2016, Democrats are set to outspend Trump in the closing days by a more than 3-to-1 ratio.

Trump argued that his rallies could help make up the difference in states that remain close.

“Where we have states that are sort of tipping, could go either way,” he said. “I have an ability to go to those states and rally. Biden has no ability, I go to a rally we have 25,000 people. He goes to a rally and he has four people.”

Trump's visit to the state is part of an aggressive schedule of campaign events.

Trump's Carson City rally was held at an airport with a golden scrub brush-covered hill providing a dramatic backdrop. He relived fond moments from his 2016 campaign against Hillary Clinton, revisited his long-running feud with NFL players and went on an extended riff about water management policy, which he blamed for people having to “flush their toilet 15 times.”