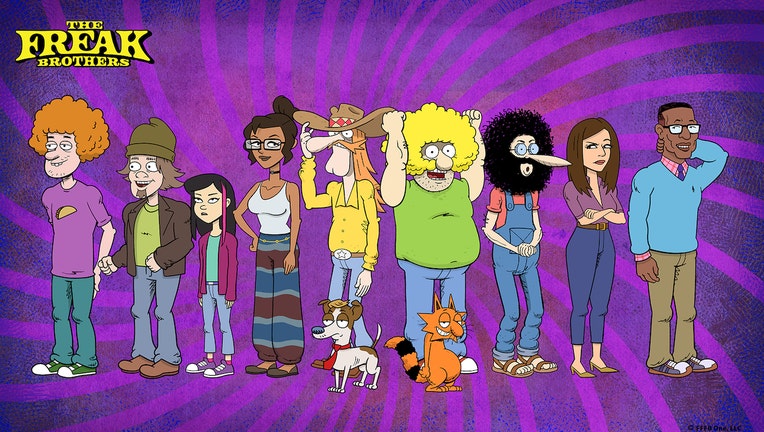 THE FREAK BROTHERS: Tubi's first original animated comedy following three stoners and their sardonic cat who, after smoking a magical strain of weed in 1969, fall asleep for 50 years and wake up in 2020, bringing their '60s San Francisco attitude to

Chicago - Fans of "The Freak Brothers" have something to celebrate. The original Tubi adult animated comedy has been renewed for a second season, which is set to premiere in December 2022. Based on Gilbert Shelton’s cult classic comic, "The Fabulous Furry Freak Brothers," the series follows three 1960s hippie stoners who smoke a magical strain of weed, only to fall into a 50-year slumber and wake up in the 2020s.

"The Freak Brothers" features the voices of Pete Davidson, Woody Harrelson and John Goodman as the three titular brothers, alongside Tiffany Haddish as a talking cat and Adam Devine and Blake Anderson as two contemporary weed connoisseurs. The-eight episode first season debuted in 2021 and quickly became one of the most-watched series on the Tubi platform.

""The Freak Brothers" has received overwhelming reception since its debut in November and has been a key driver in our growing adult comedy offering, cementing Tubi as a destination for adult animation," explained Adam Lewinson, Chief Content Officer, Tubi. "We’re excited to bring back our favorite trio of Freaks – and their trippy pet Kitty – for another wild season."

"The Freak Brothers" is the first-ever original animated series for the FOX-owned streaming platform, and this marks the first series renewal for Tubi as well. The second season is slated to feature eight new episodes.

As executive producer Mark Canton promised, "Season two will be full of hilarity and surprises for our Super Freak army."

You can watch the entire first season of "The Freak Brothers" for free on Tubi.

Howard High (2022): A modern-age "Bring It On," "Howard High" is an energetic teen musical that follows a high school performance group who must compete against a rival school in order to save their arts program. The crowd-pleasing film from "You Got Served" director Chris Stokes is inspired by his 2020 TV mini-series of the same name, which is also streaming on Tubi. With its talented cast of up-and-comers, "Howard High" shines a light on the challenges that school arts programs face in underfunded neighborhoods — all through the power of song and dance. "Howard High" is a Tubi Original. Rated TV-14. 102 minutes. Dir: Chris Stokes. Featuring: Chrissy Stokes, Veronika Bozeman, Lindsay Diann, Jarell Houston, Dylan Mooney.