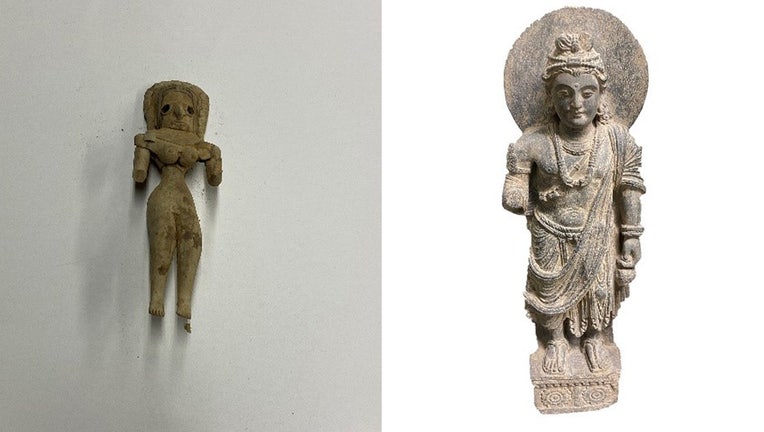 NEW YORK - Nearly 200 stolen antiquities valued at about $3.4 million have been returned to Pakistan from New York after an investigation into a Madison Avenue art dealer who has been in prison in India for more than a decade, authorities said.

Subhash Kapoor, along with his co-defendants, smuggled looted antiquities into Manhattan and sold the pieces through his gallery, Art of the Past, according to Manhattan District Attorney Alvin Bragg Jr. announced Thursday.

"Subhash Kapoor was one of the world's most prolific antiquities traffickers, yet thanks to the work of our dedicated investigators and analysts, we have been able to recover thousands of pieces looted by his network," Bragg said. "We will continue to pursue full accountability against Mr. Kapoor and his co-conspirators, who showed a blatant disregard for the cultural and historic significant of these antiquities."

Kapoor and five other people had been held in a prison in India since 2012 in connection with stealing Indian antiquities, officials said. A court in India convicted Kapoor last week and sentenced him to 13 years in prison.

The Manhattan DA's office said it is looking to extradite Kapoor and prosecute him in New York at some point.

Here are some of the objects being returned:

People are urged to contact 212-335-9323 if they have information about stolen or trafficked antiquities.