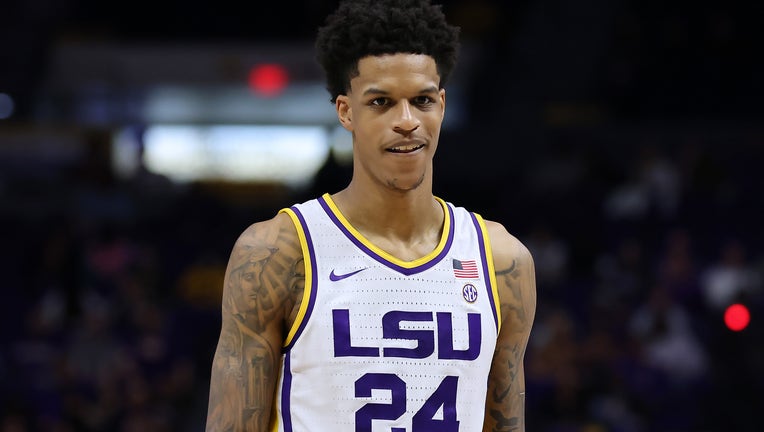 BATON ROUGE, LOUISIANA - FEBRUARY 26: Shareef O'Neal #24 of the LSU Tigers reacts against the Missouri Tigers during a game at the Pete Maravich Assembly Center on February 26, 2022 in Baton Rouge, Louisiana. (Photo by Jonathan Bachman/Getty Images)

LOS ANGELES - In a few weeks, Laker Nation may notice a pair of familiar last names wearing the purple and gold this summer.

According to a report from The Athletic's Shams Charania, Shareef O'Neal, son of Laker legend Shaquille O'Neal, has agreed to suit up for the Los Angeles Lakers for the upcoming NBA Summer League. Shareef, who turned 22 in January, was born in Los Angeles and attended Winward School and Crossroads School in Santa Monica during his high school years.

After high school, he signed with the UCLA men's basketball team before a heart scare robbed him of his true freshman season of 2018-2019, a year he was able to medically redshirt. After making a handful of appearances for the Bruins in 2019, O'Neal announced he would transfer to LSU in 2020, the same school his dad starred in for college.

A foot injury slowed the younger O'Neal down at the start of the 2020-2021 season but was able to squeeze in 10 games total that same campaign. Injuries followed Shareef the following season, where he played a total of 14 games in 2021-2022, his final season with the Tigers.

Shareef went undrafted Thursday night but now has a chance of possibly making the same team his dad won three NBA championships with.

Although he went undrafted like Shareef O'Neal, Pippen Jr. was named All-SEC first team by the coaches in his conference during his junior year with the Commodores (2021-2022).