Ohio teen with spinal cancer gets to be honorary Marine

Make-a-Wish and the U.S. Marines made Sam Short's dream a reality.

Sam Short of Columbus, Ohio, is just 16, but he’s already proven himself to be a warrior.

Back in 2018, he was diagnosed with spinal cancer. Yet this April, the teenager made a wish with the U.S. nonprofit organization Make-A-Wish, which helps fulfill the wishes of children who are fighting critical illness.

"Even though they were just two-and-a-half days — it really was a life-changing experience for Sam," Tori Short, Sam's mom, told Fox News Digital.

He struggled to walk

Sam Short is a lot like other teenagers. He's a sophomore in high school and recently obtained his driver’s license. He loves sports, especially basketball and baseball, and he has three younger siblings, a brother, 14, and two sisters, 11 and 8.

When he’s not in school, the teenager works at a hardware store. 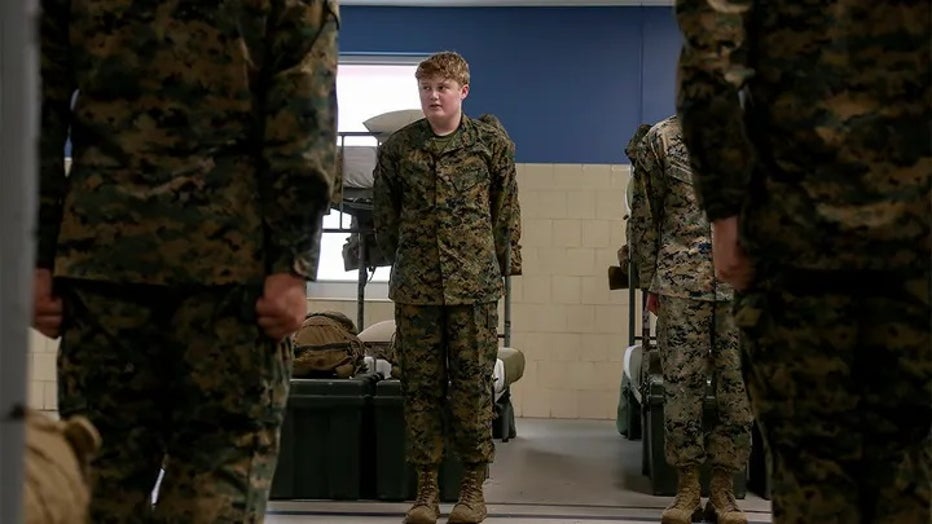 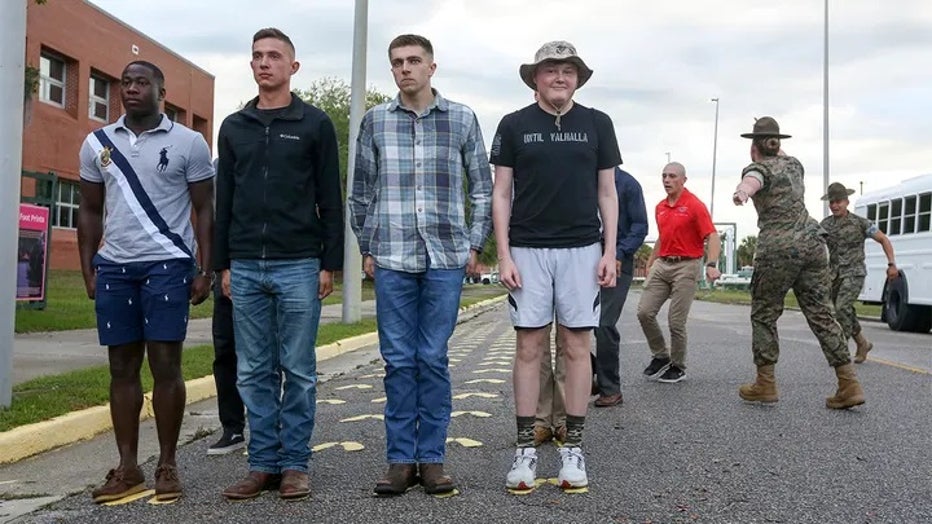 Sam (at right, wearing hat) arrived at Parris Island in S.C. on April 27. He was joined by seven Marines who went through Sam's boot camp with him as other "recruits." (U.S. Marine Corps photo by CWO2 Bobby J. Yarbrough) 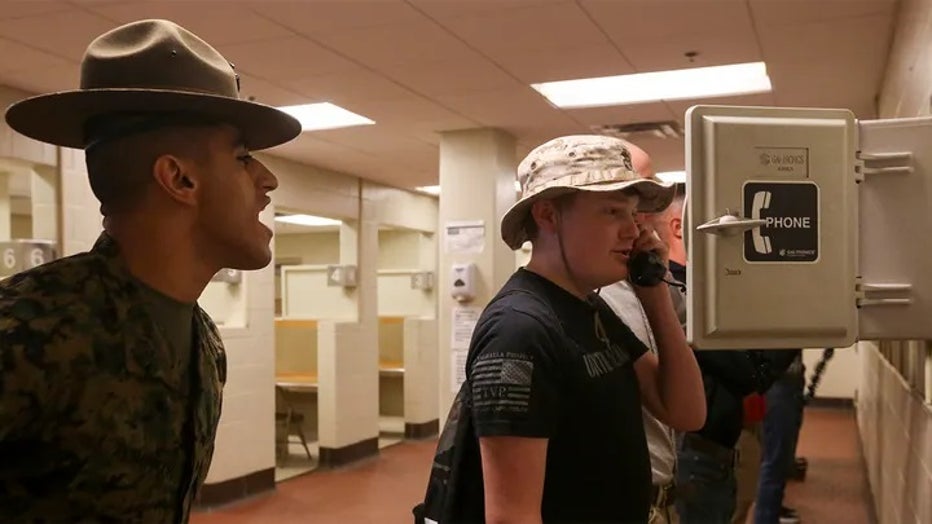 Though his training was shorter than the typical 13-week boot camp that Marine recruits go through, Sam still had some of the same experiences that recruits go through — including getting yelled at by drill instructors. (U.S. Marine Corps photo by CW

Four years ago, the active, then-12-year-old started struggling to walk and keep his balance, said his dad, Mike Short, in a video interview with the Marine Corps.

After Christmas in 2018, doctors found a tumor on Sam’s spine and neck.

The tumor was removed in surgery, but within a year the cancer aggressively returned, Sam Short himself told Fox News Digital.

Doctors weren’t able to fully remove the cancer during a second surgery, so Sam underwent radiation and chemotherapy, which he said makes him feel miserable.

"[The cancer has] basically taken a lot of the things that I loved to do away," Sam told Fox News Digital. "I can’t play sports, which is really hard. But it was definitely hard balancing school and treatment."

Tori Short, Sam's mother, told Fox News Digital that her eldest son’s diagnosis has been challenging for the whole family.

"We try to not get ahead of ourselves," she said. "We also try not to get stuck."

"We live scan to scan," she said, "and try not to live in the anxiety of what might happen. [We’re] trying to really continue to hope and push forward and also live in the reality [that] things can change at a moment’s notice." 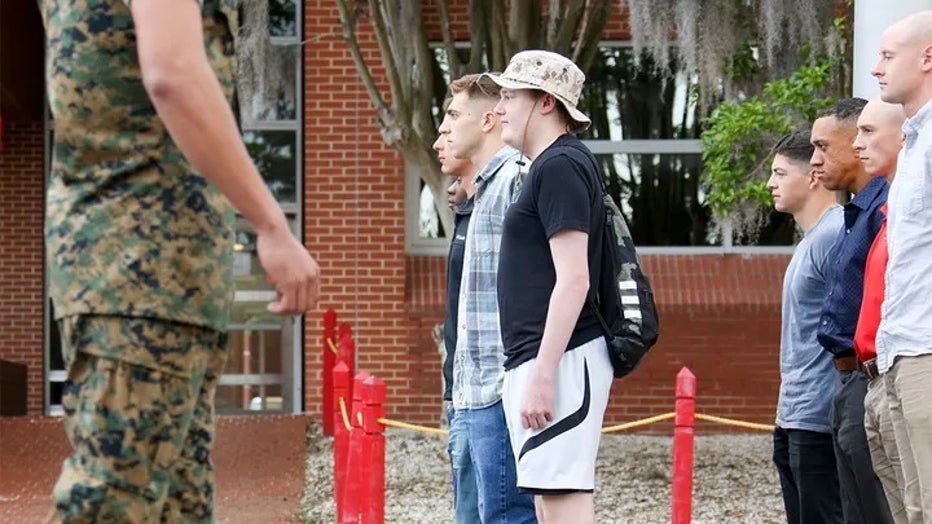 Aside from his cancer diagnosis, Sam Short (above, in hat) is a typical teenager. As a sophomore in high school, he recently earned his driver's license; when he's not in school, he works at a hardware store. (U.S. Marine Corps photo by CWO2 Bobby J. 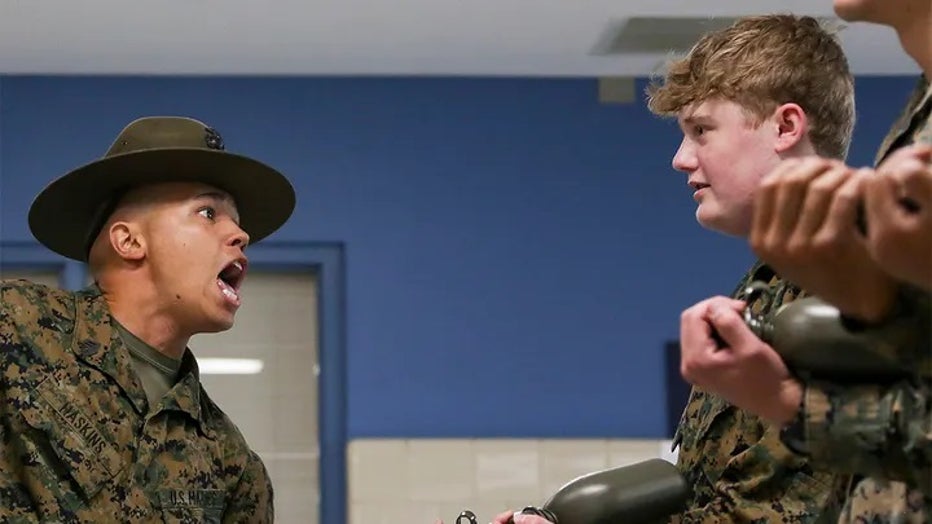 Tori Short said she and her husband try to balance the challenges with trying to maintain a normal life for their kids.

"Despite Sam's diagnosis, he still has to do laundry and mow the lawn and do normal chores," said the mom. "We try to keep things as normal as possible because on the other side of this is real life."

She added, "We can't wait for bad things to happen — so we're going to continue to live in the present."

Sam has always wanted to be a Marine.

He told Fox News Digital that his uncle served in the Marine Corps, which inspired him to choose Parris Island for his Make-A-Wish. 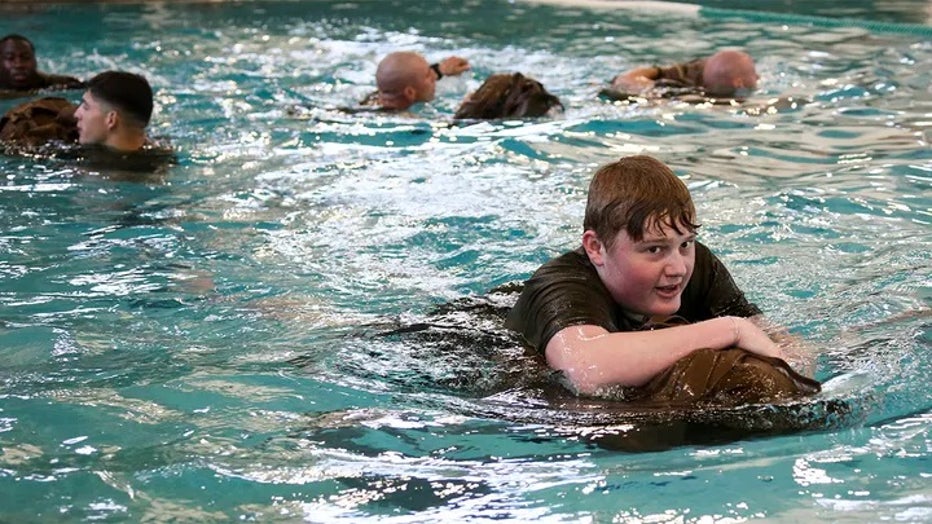 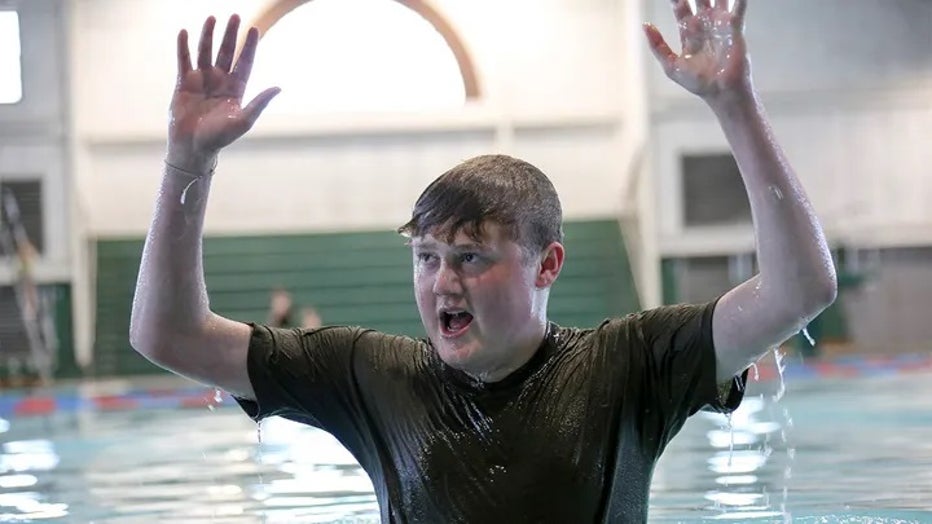 "[Sam] really wanted to come out and prove himself," Mike Short said in a Marine Corps video. "He was really adamant that this is where he wanted to go and what he wanted to do."

Make-A-Wish America spokesperson Jono Smith said in a statement that Sam’s wish to become a Marine — like many other children who have patriotic wishes to be in the military or law enforcement — follows in the footsteps of the original inspiration for Make-A-Wish, Chris Greicius. He was a 7-year-old with leukemia who wanted to be a police officer in 1980.

"The spirit of Semper Fidelis provides a powerful emotional inspiration for these Make-A-Wish kids who see their wish as a turning point in their often successful battles to overcome critical illness," Smith said.

"When you help grant a wish, you restore hope for a child and help them reclaim their childhood, which is what the U.S. Marines have done for Sam and so many other Make-A-Wish kids," Smith added.

'He was so happy there’

On April 27, Sam and his family went to Marine Corps Recruit Depot Parris Island, South Carolina, where the U.S. Marine Corps has trained recruits since 1915.

While there, Sam went through a shortened, two-day version of boot camp, which usually lasts 13 weeks. 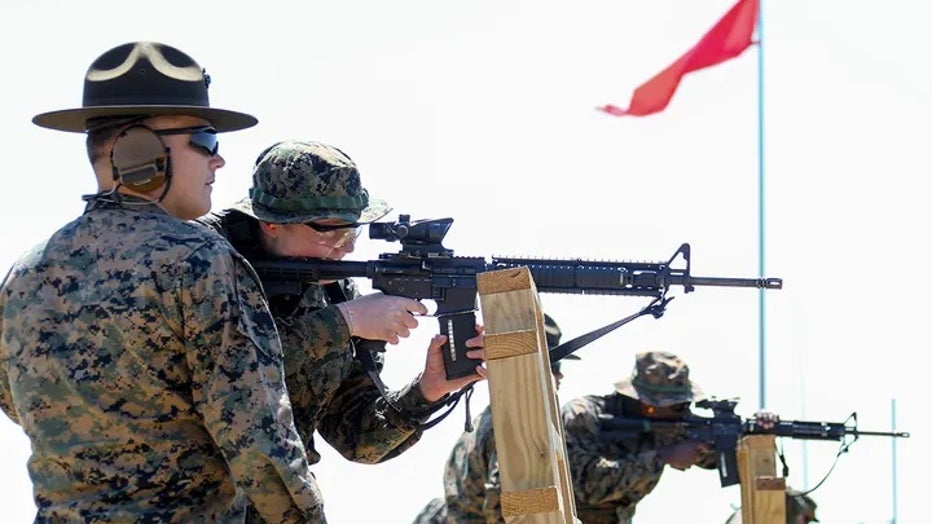 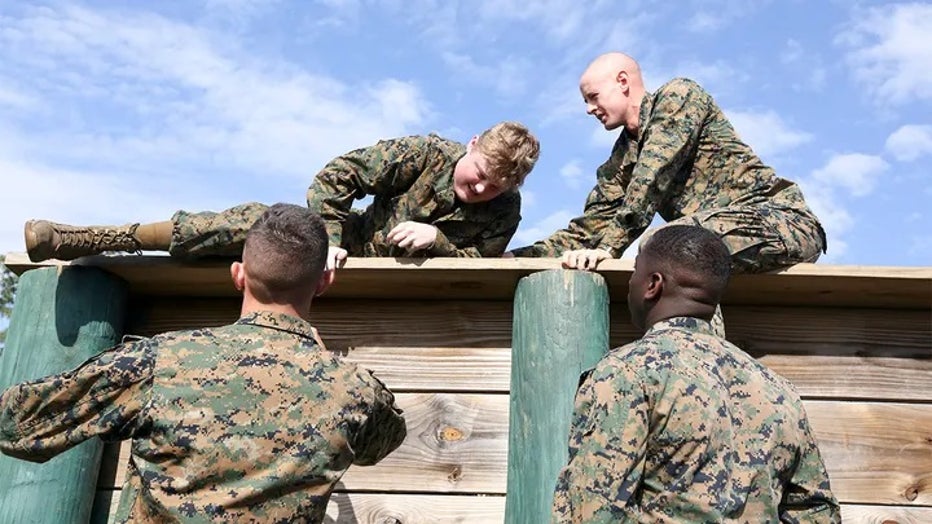 Sam also did the obstacle courses on Parris Island, with the help of the other "recruits" who were with him. (U.S. Marine Corps photo by CWO2 Bobby J. Yarbrough)

Sam trained on obstacle courses, participated in swim qualifications, went through the gas chamber, did rifle training and even completed what’s known as the Crucible. It's the final challenge that all Marine recruits go through before they graduate from boot camp.

"It was physically pretty hard," Sam said. "There was a lot of different stuff we had to do that I sometimes couldn’t do. But it was still fun."

Like all recruits, Sam even endured yelling from his drill instructors, he said.

"It was like, ‘Are you allowed to yell at a Make-A-Wish kid?’" Sam joked. Yet it didn’t put a damper on his experience.

"He just had a smile on his face the entire time, likely when he shouldn't be smiling," Tori Short said. "He just couldn't take the smile off his face."

"It was hard to come home because he was so happy there," she added. While at Parris Island, Sam completed what’s known as the Crucible, the final challenge all Marine recruits go through before graduating from boot camp. (U.S. Marine Corps photo by CWO2 Bobby J. Yarbrough) 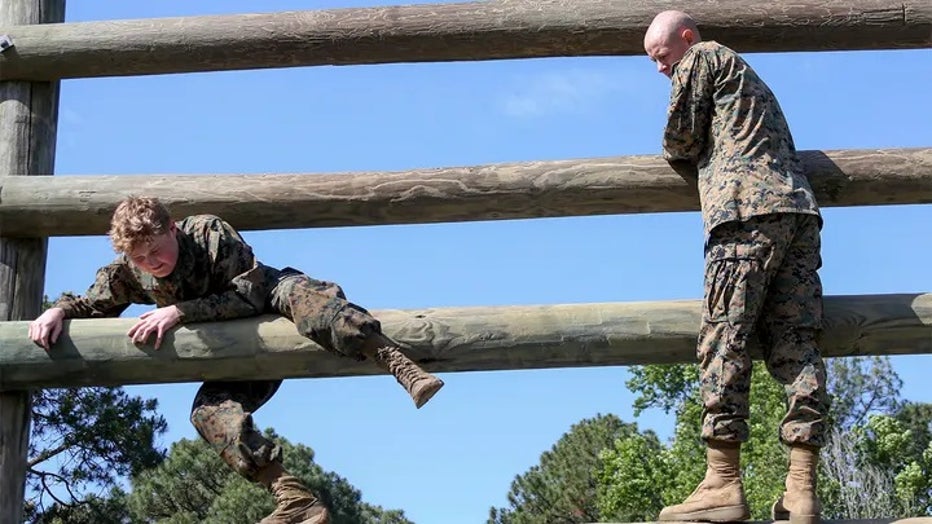 "It was physically pretty hard," Sam said of boot camp. "There was a lot of different stuff we had to do that I sometimes couldn’t do. But it was still fun." (U.S. Marine Corps photo by CWO2 Bobby J. Yarbrough)

One of the best parts of boot camp for Sam was the companionship of other "recruits."

Seven Marines on Parris Island left their ranks for two days to join him during the training.

Tori Short said there were times when Sam wasn’t able to complete a challenge; the other Marines kindly helped him fill in the gaps.

"If there was a time where he couldn’t do it, they did it as a team," Tori Short said, adding that the best part of the experience was watching Sam during boot camp.

"We got a front-row seat to see his dream come true," she said.

He became an honorary Marine

After two days of boot camp, Sam enjoyed a special ceremony from the Marines.

He received his Eagle, Globe and Anchor — the emblem of the U.S. Marine Corps, which all graduating recruits receive. In front of 750 people from the Parris Island base who attended the ceremony, Sam was named an honorary Marine.

"We were blown away," said Tori Short. 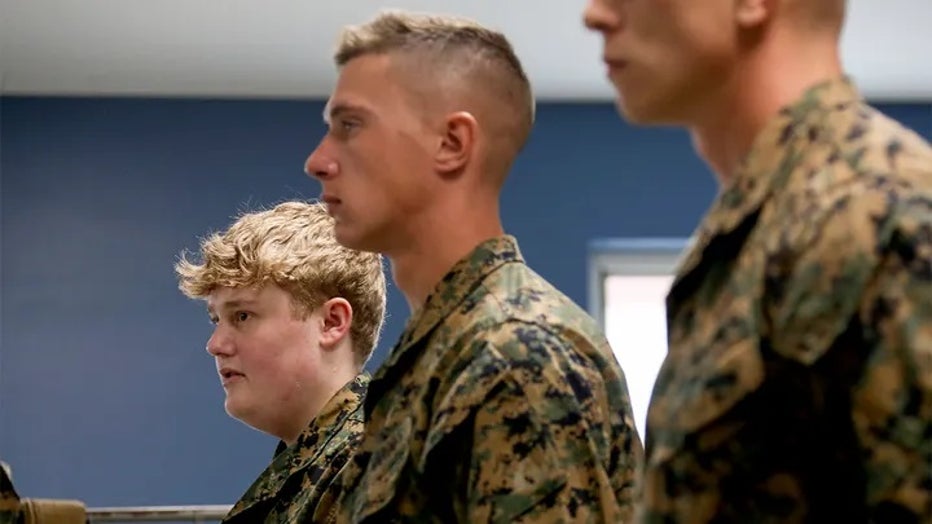 "It was an honor for us to work with this amazing young man. He represents the tremendous fighting spirit and commitment that we look for in each aspiring Marine," Major Philip Kulczewski, director of communications, strategy and operations for Parri 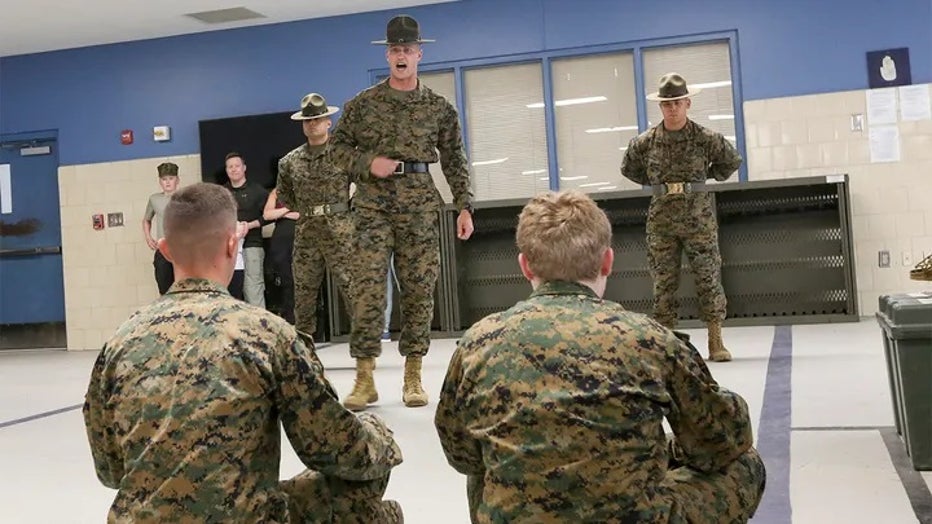 Despite the challenges he faced amid boot camp, Sam said he had fun during the process, particularly with the other "recruits." (U.S. Marine Corps photo by CWO2 Bobby J. Yarbrough)

"We were just treated with such amazing hospitality and care," she added. "Everyone was so gracious and supportive and encouraging … We’ve never been so impressed by a group of individuals in this process."

Major Philip Kulczewski, the director of communications, strategy and operations for Parris Island, said in an email, "It was an honor for us to work with this amazing young man. He represents the tremendous fighting spirit and commitment that we look for in each aspiring Marine."

Today, Sam said he’s doing OK. He's undergoing a second round of chemotherapy after finishing radiation treatment back in March. 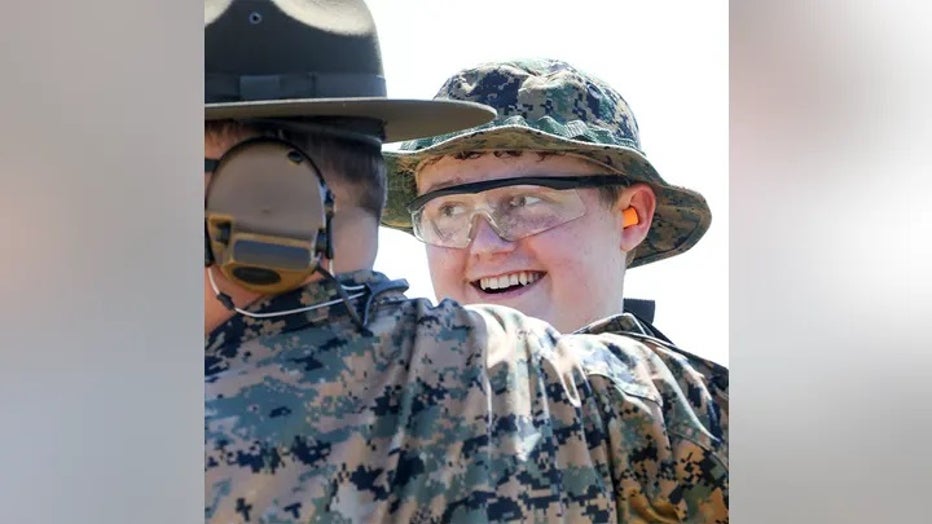 After going through the two days of boot camp, Sam was given his Eagle, Globe and Anchor, the emblem of the U.S. Marine Corps — and was named an honorary Marine. (U.S. Marine Corps photo by CWO2 Bobby J. Yarbrough) 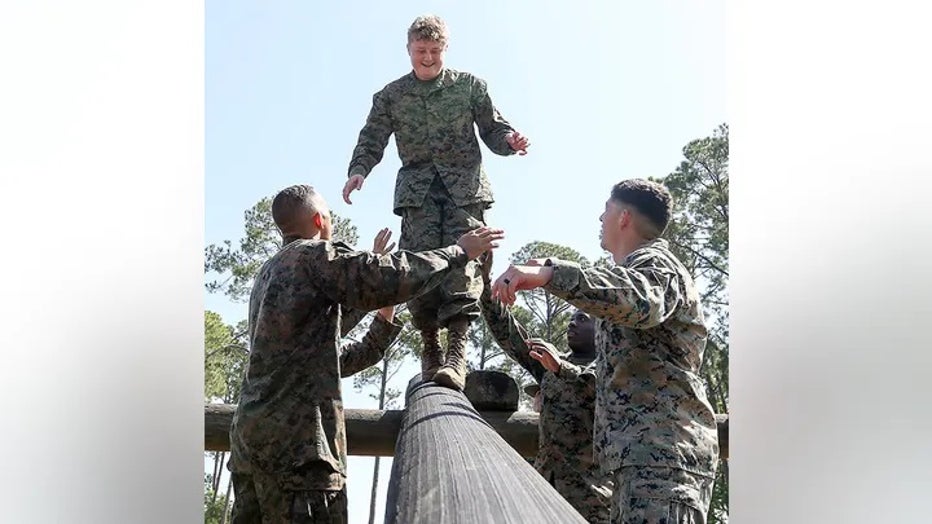 During some of the challenges that were harder for Sam, the Marines who were acting as recruits made sure to fill in any gaps so that they could all complete the challenges as a team, said Tori Short. (U.S. Marine Corps photo by CWO2 Bobby J. Yarbrou

"The captain who put the whole thing together spoke at Sam's Eagle, Globe and Anchor ceremony and talked about Sam being a warrior," Tori Short said.

She said she and her entire family are grateful to Captain Seth Sotelo, as well as the seven Marines who served as "recruits" alongside Sam.

At the end of his training, Sam was given the honorary title of Marine.

"It was crazy because I didn’t expect any of that," said the young man. "I was really honored. It was really, really cool."

Added his mom, "Everyone has a battle to fight. The Marines are protecting the United States and Sam's battle is with his health."