Florida woman snaps photo of alligator being hauled behind SUV

Karen Kress said she and her family were driving along Interstate 95 in Florida on Saturday when they spotted the gator being hauled behind an SUV. She said she had to speed up quite a bit to get close enough to take a photo.

BREVARD COUNTY, Fla. - A photo of an alligator – presumed to have been killed during a hunt – being hauled behind an SUV in Florida over the weekend has begun to make the rounds on social media – and has people divided and asking questions. Is it real? Could it be fake? Could it be a Halloween decoration? And is it legal to transport an alligator this way?

Karen Kress said she and her family were driving along Interstate 95 in Brevard County on Saturday when they spotted the gator. She said she had to speed up quite a bit to get close enough to take a photo.

She posted it on her Facebook page with the caption: "Spotted on I-95 yesterday. I’m accepting suggested captions….obviously this is in floriduh."

On Tuesday, she told FOX 35 that she and her family are "99% convinced its real," and said there appeared to be some sort of cut or gash on the gator's tail. She presumes it was killed during a legal hunt. 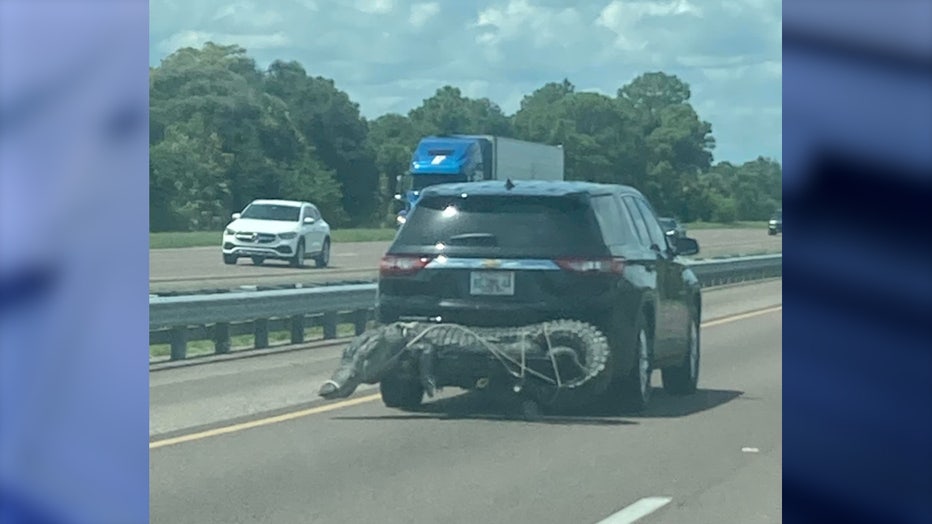 The grainy photo she shared with FOX 35 shows a large gator being hauled behind an SUV, apparently on a cargo rack, and appears to be tied with some rope.

Florida's hunting season runs Aug. 15 - Nov. 1, and some 7,000 permits are available, which is required to hunt and tag a gator.

A spokesperson for Florida Fish and Wildlife Conservation Commission told FOX 35 in an email that "transporting a lawfully harvested alligator in this manner in the state of Florida is not a violation of Florida’s regulations," though the agency said it could not "speculate as to the authenticity, age, location, timing or any other aspect of the image provided."

What do you think?