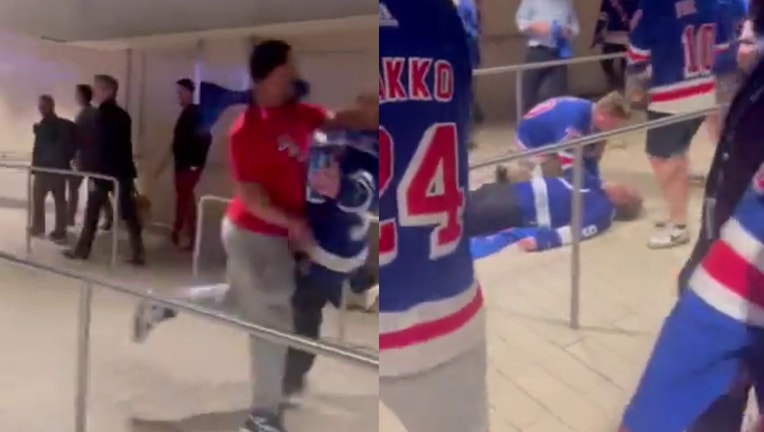 NEW YORK - A man has been arrested after allegedly being seen in a viral video sucker-punching a Tampa Bay Lightning fan after the New York Rangers lost Game 5 of the Eastern Conference Final at Madison Square Garden on Thursday.

In a video that has gone viral on Twitter, the fan can be seen suddenly turning and punching a Lightning fan walking just behind him, knocking him out cold.

The NYPD announced Friday that it had arrested James Anastasio, 29, of Staten Island, in connection to the attack and that he is being charged with two counts of assault, two counts of disorderly conduct, and two counts of harassment.

The victim reportedly refused medical attention at the scene.

New York Post reported that the pair had had an interaction prior to the punch and when Anastasio tried to run from the scene, a  witness attempted to stop him and was also punched in the face.

"Last night, an abhorrent assault took place against a Tampa Bay fan at the conclusion of the game - followed by a second assault against an individual who bravely intervened," Madison Square Garden said in a statement Friday afternoon. "First, we ensured the victims received appropriate medical care and have followed up to provide support from our guest services team."

"The assailant will also be banned from The Garden and all other MSG venues for life," the statement continued. "All guests - no matter what team they support - should feel safe and respected in The Garden."