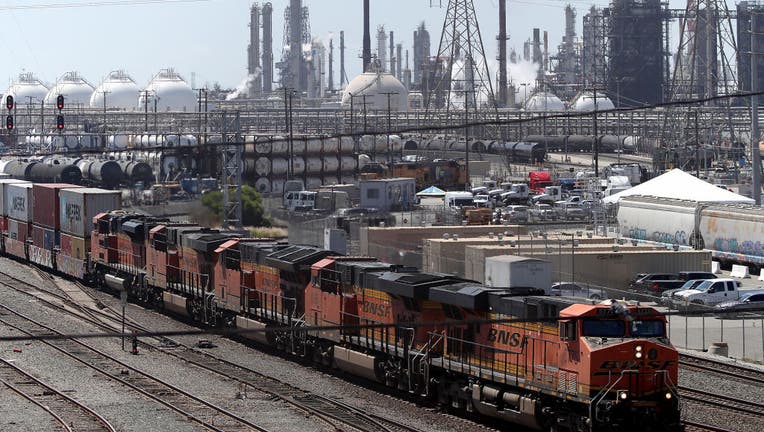 A freight train rolls past an oil refinery in the Port of Los Angeles in Wilmington. (Luis Sinco / Los Angeles Times via Getty Images)

OMAHA, Neb. (AP) - The major freight railroads appear unwilling to give track maintenance workers much more than they received in the initial contract they rejected last week, increasing the chances of a strike.

The railroads took the unusual step of issuing a statement late Wednesday rejecting the Brotherhood of Maintenance of Way Employes Division union’s latest request to add seven days of paid sick time on top of the 24% raises and $5,000 in bonuses they received in the first five-year deal.

Union Pacific CEO Lance Fritz said Thursday that he thinks the main reason the BMWED rejected its initial contract last week was that the details of improved expense reimbursement in the deal were still being negotiated at UP while workers were voting. So it wasn't clear exactly what those workers would receive for their travel expenses when they go on the road to repair tracks.

Six of the 12 railroad unions that represent 115,000 workers nationwide have approved their tentative agreements with the railroads so far, but all of them have to ratify their contracts to avoid a strike. The unions have agreed to put any strike on hold until at least mid-November while the BMWED negotiates a new deal and the other unions vote on their proposed contracts. That means there's no immediate threat the trains most businesses rely on to deliver their raw materials and finished products will stop moving. A railroad strike could devastate the economy.

"Ultimately, I remain confident that we’re going to get our temporary agreements ratified and be able to avoid a strike. That’s still a possibility but I don’t think it’s a probability," Fritz told investors after his railroad released its quarterly earnings report.

The group that negotiations on behalf of the major railroads, including UP, BNSF, Norfolk Southern, CSX and Kansas City Southern, said the new contracts should closely follow the recommendations of the special board of arbitrators that President Joe Biden appointed this summer. The railroads said that board rejected union demands for paid sick time.

"Now is not the time to introduce new demands that rekindle the prospect of a railroad strike," the railroads said.

Concerns about quality of life and the ability for workers — particularly the engineers and conductors who drive the trains — to take time off without being penalized have weighed heavily on the negotiations. The maintenance workers in the BMWED union generally have more predictable schedules than the train crews, but they and the rest of the rail workers lack traditional sick leave.

BMWED spokesman Clark Ballew said providing paid sick leave "has become a norm in this society" and railroads should step up and provide that to its employees.

"It is not unreasonable and the railroads can very easily afford it, and they’d still be making record profits if they agreed to provide railroad workers paid sick leave," Ballew said.

The railroads say workers do have significant short-term disability benefits that kick in after four or seven days and last up to 52 weeks that the unions have negotiated for over the years. They said the unions have repeatedly agreed that short-term absences would be unpaid in favor of higher wages and more generous benefits for long-term illnesses.

If both sides can't agree on contracts, Congress could step in to block a strike and impose terms on the workers.