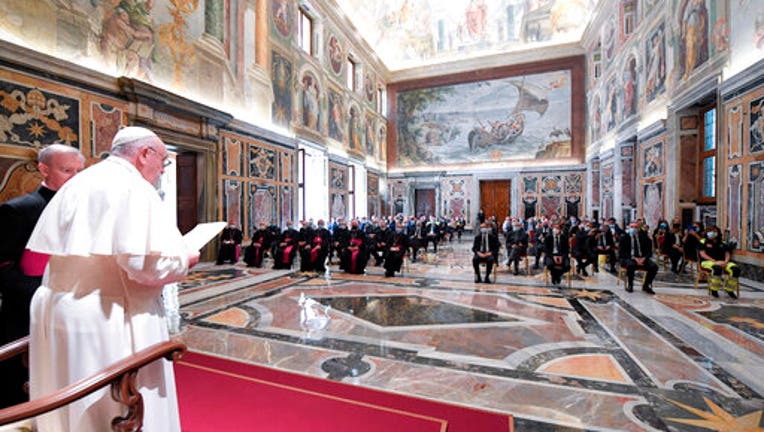 Pope Francis adresses doctors and nurses from the coronavirus-ravaged Lombardy region, at the Vatican, Saturday, June 20, 2020. (Vatican News via AP)

VATICAN CITY - Pope Francis welcomed doctors and nurses from the coronavirus-ravaged region of Lombardy to the Vatican on Saturday to thank them for their selfless work and “heroic” sacrifice.

Francis dedicated one of his first post-lockdown audiences to Italy's front-line medical and civil protection personnel, telling the delegation that their example of professional competence and compassion would help Italy forge a new future of hope and solidarity.

The northern region of Lombardy, Italy’s financial and industrial capital, was the hardest-hit region in the onetime European epicenter of the pandemic. Lombardy has counted more than 92,000 of Italy’s 232,000 official infections and half of the country's 34,500 dead.

Francis noted that some of those dead were the doctors and nurses themselves, and said Italy would remember them with “prayer and gratitude.” More than 40 nurses and 160 doctors died during the outbreak nationwide, and nearly 30,000 health care personnel were infected.

Francis said Lombardy’s medics and nurses became literal “angels” helping the sick recover or accompanying them to their death, given their family members were prevented from visiting them in the hospital.

Speaking off the cuff, Francis praised the “little gestures of creativity of love” they provided: a caress or the use of their cell phone “to bring together the old person who was about to die with his son or daughter to say goodbye, to see them for the last time...”

“This was so good for all of us: testimony of proximity and tenderness,” Francis said.

In the audience were the bishops of some of the hardest-hit cities in Lombardy, as well as representatives of Italy's civil protection agency, which coordinated the emergency response and built field hospitals around the region. They sat well-spaced apart and wore protective masks in the frescoed audience hall in the Apostolic Palace.

The pope said he hoped Italy would emerge morally and spiritually stronger from the emergency and the lesson of interconnection that it taught: that individual and collective interests are intertwined.

“It’s easy to forget that we need one another, someone to take care of us and give us courage,” he said.

The encounter was only the second time Francis has welcomed a group into the Vatican for an audience since the Vatican locked down in early March along with the rest of Italy to try to contain the virus. The first was a small encounter May 20 with a group of athletes who are raising money for hospitals in two hard-hit Lombardy cities, Brescia and Bergamo.

At the end of the audience, Francis made sure that the doctors and nurses kept their distance, telling them he would come to them rather than have them line up to greet him and kiss his ring, as was the Vatican's pre-pandemic practice.

“We have to be obedient to the dispositions" of social distancing, he said.