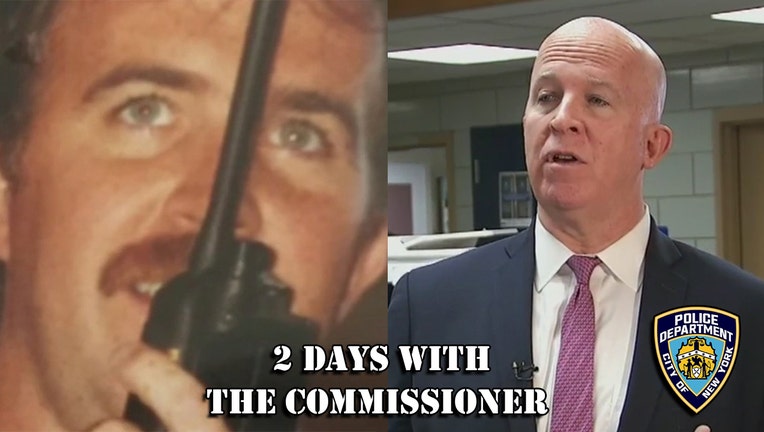 NEW YORK - Police Commissioner James O'Neill seems like a low-key guy in a high-profile position but from our two days of exclusive access with him, his core passion for policing and the people of New York City comes through loud and clear. And he is succeeding in reducing crime while improving community relations.

O'Neill took me to where it all started for him wearing the blue uniform and badge of the NYPD: at the Bedford Park D and B train station in the Bronx on the 8 p.m. to 4 a.m. overnight shift.

"I remember my first time on my solo train patrol," he said.

It was 1983. He was 25. There were no cell phones and police radios were unreliable underground.

"As a transit cop, even if you didn't do train patrol, a lot of times you were on solo patrol, so you really had to use your brain, use your mouth," he said. "Really figure out when you were going to take police action and when you weren't."

That began his belief in the power of talking over takedowns, and the job satisfaction he has enjoyed for 35 years.

"As soon as you walked into that train car, you could see, even at 2 o'clock, 3 o'clock in the morning the sense of relief on people's faces," O'Neill said.

Being on the subway platform where transit officer O'Neill spent so many rookie nights brings back memories of pre-technology productivity tracking.

"You'd wait for the train here, it'd come in at 20:47, and you'd have to write the lead car number down in your memo book," he said, "so that they know you were really on the train."

Does he remember his first arrest?

"I ended up handcuffing the guy that was beating up the off-duty cop, during the course of handcuffing him, I was wearing, we wore two guns back then, one on my hip and one I had in a shoulder harness," he said, "and then in the course of the fight, the gun in the shoulder holster fell out and slid across the train floor, and after I had the guy cuffed, somebody came up to me and said, 'You dropped this.'"

O'Neill's common sense, toughness, and communication skills were noticed by police brass over and over again. The lessons from his first days shaped the policies he would later put in place as police commissioner.

O'Neill honed his vision of neighborhood policing during his years as the commanding officer in the 44th Precinct in the South Bronx.

At East 169th Street and Jerome Avenue, the 44th Precinct is one of the busiest precincts in the city, and like the department itself, is now majority minority. Patrol officers typically respond to as many as two dozen 911 radio calls in an 8-hour shift, leaving no time for casual conversation or building relationships.

O'Neill told me that going to community meetings almost every night gave him the idea of NCOS, or neighborhood coordination officers, who would be able to build with the community. There are currently 10 in the 44th Precinct and it's now citywide. It's not some feel-good public relations ploy, but a real program that the commissioner says enhances crime-fighting capabilities.

From the South Bronx, we headed to the Neptune Diner across the RFK Bridge in Astoria—one of the commissioner's favorite spots. We sat down for a cup of coffee and a brief moment of reflection on policing today. He said despite the changes in policing, he never forgot where he came from.

"I think that's what really helps me," he said.

He told me he is thinking a lot now about the consequences of marijuana legalization and what it will mean for safety in the city.

The commissioner said the NYPD has sent officers to Washington, California, and Colorado to see the effects of legalization and what unexpected issues might arise.

We arrived at Police Headquarters at 7:45 a.m. Commissioner O'Neill had already been at his office for nearly two hours, preparing for a nonstop day that takes him into the night. We were given exclusive access to his private office.

"I was sworn in unofficially on Friday, September 16th, and the Chelsea bombing was on Saturday, September 17th," he said. "So I didn't really have time to think about what the job is, I was right into it."

The bombing, coming as it did on a warm Saturday in Manhattan, shocked the city and immediately put him under an international media spotlight. Fortunately, no lives were lost, but the pressure was squarely on the shoulders of the commissioner to find whoever was behind it.

"At first I was like, here's a bombing in New York City on my first day as police commissioner. After that I said I have 35 years' experience, I have personal relationships with the FBI, with Dan Nigro from the Fire Department, with George Beach from the state police," O'Neill said. "I know we're going to get to the bottom of this and we ID'd someone within 35 hours."

O'Neill had also worked closely with the NYPD's Counterterrorism and Intelligence units. He believes in the power of personal connections and accountability. We were allowed into his weekly executive staff briefing, one of the ways he keeps his finger on the pulse of the city.

Under O'Neill's leadership, in 2018 the city recorded under 300 murders—a figure so low it hasn't been seen since the 1950s. Like his own background, most of his chiefs and leadership have come up through the ranks.

As chief of department, O'Neill helped lead the NYPD through a very difficult year—2014—that included the police chokehold death of Eric Garner, protests in the streets, and the assassination of two New York City police officers, Rafael Ramos and Wenjian Liu.

Later in the day, at a swearing in of new officers, he shared his philosophy.

"There's a reason people decide to become cops. It's not for the recognition, it's not for the pay,"
O'Neill said. "It's because you understand cops are members of the community who believe in making this a safer city and a safer country for everyone."

After swearing in the new recruits, we were behind the scenes as the mayor and commissioner prepared to brief the media on New Year's Eve security preparations. Communicating what is going on is a big part of his nonstop days.

Then he attended a holiday party at the Boys and Girls Club in the Throggs Neck Houses where he greeted residents and took pictures with members of the NYPD's youth Explorer Program.

Why is doing that so important after such a long day?

"I love coming up to the Bronx, I love coming out to the community," he said. "This is something I expect our police officers to do and I have to lead by example."

O'Neill's leadership has boosted police morale and created many new opportunities for motivated officers. No matter how much society changes, policing is always about the people.