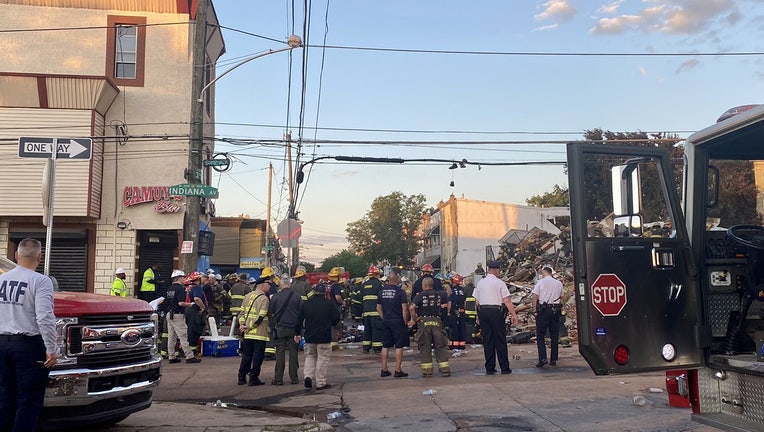 A firefighter died and another transported to the hospital after a building fire and collapse in Philadelphia.

PHILADELPHIA - One firefighter has died after being trapped in a building that caught fire in Philadelphia and then collapsed early Saturday, fire officials said.

The fire broke out at a commercial building around 2 a.m. on West Indiana Avenue early Saturday morning. Crews were able to get the fire under control in about 15 minutes.

However, a large portion of the building collapsed as officials surveyed the damage. It is believed to be the building's roof.

The fallen firefighter was not immediately identified, but Deputy Fire Commissioner Craig Murphy said he was a 27-year department veteran.

Four other firefighters and an inspector with the city's Department of Licenses and Inspections had been rescued from the rubble. Murphy said they were in stable condition at hospitals.

A photo of the scene showed a pile of rubble and bricks surrounded by dozens of firefighters and other emergency responders.

No signs of smoke or fire were visible in the photo, however the tweet it was attached to said, "The fire response remains at 2-alarms."

About four hours earlier, just after 2:05 a.m., an official fire department Twitter account for automated alerts sent a tweet warning people to avoid a fire at an address in the Fairhill neighborhood of northern Philadelphia.

That was immediately followed by a brief tweet listing the same location and the words, "UPDATE: All Hands." At about 2:20 a.m., another tweet said the fire was under control, listing the same address.