The NYPD says that the detective injured after a bullet struck his patrol vehicle in Brooklyn was not the intended target.

NEW YORK - An NYPD officer has been hospitalized after he was caught in the crossfire of a gun battle in Brownsville, Brooklyn on Thursday afternoon.

According to NYPD Commissioner Keechant Sewell, the officer was on patrol in a marked NYPD vehicle near Pitkin Avenue and Legion Street at around 4:30 p.m. when a suspect walking on foot nearby suddenly, and without provocation produced a firearm and opened fire in broad daylight.

Authorities said they believe the shooter was attempting to hit a white vehicle that was heading northbound on Legion Street.

Police say that during the gunfire, one bullet struck the driver's side window of the patrol vehicle, smashing the glass.

The officers immediately got out of their vehicle and pursued the gunman, who ran away and managed to escape.

The officer driving the vehicle sustained an injury to his arm and was taken to Kings County Hospital where he is being treated for non-life-threatening injuries.

The injured officer has been identified as 26-year-old detective Sunjay Verma.

Police recovered a pistol near the scene of the shooting. 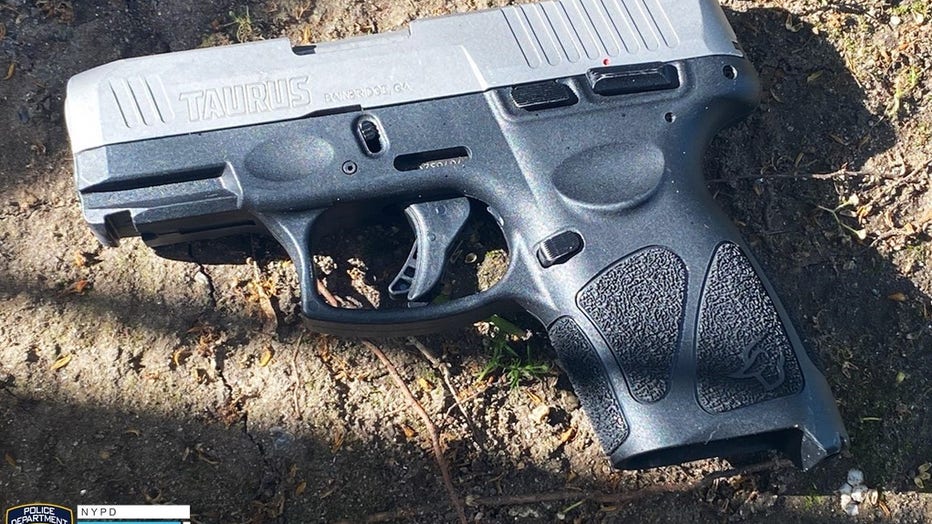 A pistol recovered from near the scene after a NYPD officer was caught in a gunfight and injured in Brooklyn on Thursday. (Credit: NYPD)

"More and more, we need every arm of the criminal justice system to participate in this fight, and we feel as though it's not," Mayor Eric Adams said in a press conference addressing the shooting where he criticized the recent Supreme Court decision that struck down key portions of the New York's gun-licensing law for making the NYPD's job more difficult.

There is a reward of up to $13,500 for information leading to an arrest/conviction of the individual(s) involved in the shooting.