The suspected gunman accused of opening fire inside of a waiting room at Jacobi Medical Center is in custody. The NYPD says they tracked him down after he signed in at the hospital.

NEW YORK - A man is under arrest after an argument between two men inside Jacobi Hospital in the Bronx ended when one man shot the other, police said.  The shocking attack was captured by a security camera.

The victim, a 35-year-old man, was in the sitting area outside the emergency room and waiting to be treated on Tuesday afternoon. Another man came into the reception area and spoke to a hospital representative, police said.

At some point, the two men "exchanged looks and words," police said. Then one man pulled out a handgun and fired four shots, striking the 35-year-old man, the NYPD said.

The gunman ran away. The victim was rushed into surgery, authorities said.

Police said a man came into Jacobi Hospital and got into an argument with another man and then shot him.

A person who was on the fourth floor in the hospital at the time said they heard reports of an active shooter over the hospital loudspeakers and the doors were locked. He said they could not move for more than half an hour.

Within minutes police surrounded the hospital, which is just across the street from the station house of the 49th Precinct.

Video showed several NYPD vehicles outside the hospital and police tape blocking an area in front of the building shortly after the shooting..

Councilwoman Marjorie Velásquez, who represents the area, rushed to the hospital. She said she was told the victim was wounded in the arm.

Hours later, the NYPD announced the arrest of Keber Martinez, 25, of the Bronx in connection with the shooting.  He faces attempted murder, freckles endangerment, and weapons charges.

FOX 5 News reported that police say he wrote his real name in the sign-in book, making it easier for police to identify him. 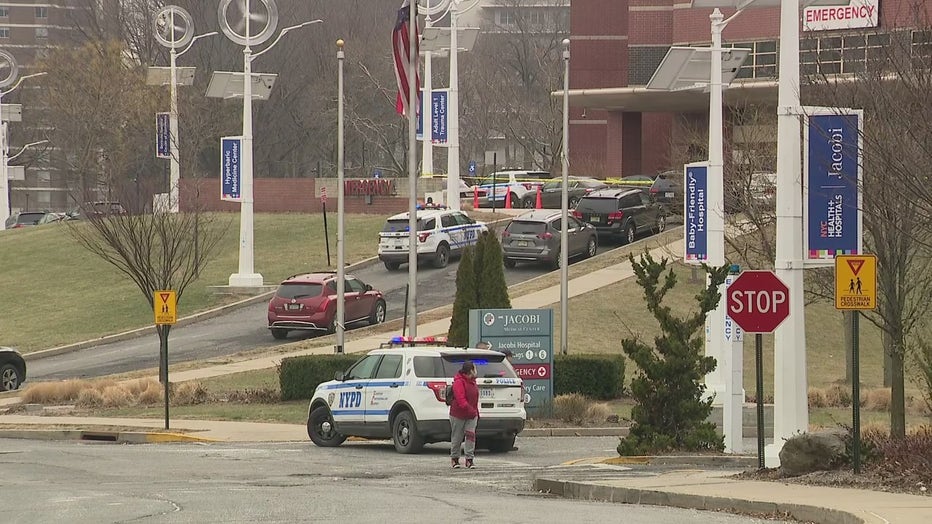 Police responded to Jacobi Hospital in the Bronx for a report of a shooting.

Jacobi Hospital is part of NYC Health + Hospitals, the city's public hospital system, which called the shooting a "cowardly act."

"Our health care heroes swiftly took care of the shooting victim and took actions to protect the other patients in the waiting room," NYC Health + Hospital said in a statement. "Our immediate focus is on caring for the patient and ensuring the safety of our staff. We are working closely with the NYPD as they conduct their investigation."

Jacobi is located in the Morris Park neighborhood.

A man who was inside of Jacobi Hospital described the scene as the NYPD responded.