Advocates for the Adult Survivors Act have said it can take years for sexual assault survivors to come to terms with what happened to them, whether it be guilt, trauma or the fear of retaliation that keeps them from coming forward right away.

NEW YORK - Gov. Kathy Hochul signed the Adult Survivors Act into law on Tuesday. The historic move will give adult survivors of alleged sexual abuse one year to file civil lawsuits in New York against their assailants and organizations that shielded them, even if the statute of limitations has run out.

"Those who thought they got away with horrific crimes they committed I just have one message — your time is up," Hochul said. "Your victims will see you in court and you will be brought to justice."

Advocates for the bill have said it can take years for survivors to come to terms with what happened to them, whether it be guilt, trauma, or the fear of retaliation that keeps them from coming forward right away.

"My name is Marissa Hoechstetter, and I am one of over 230 women who reported abuse by the same doctor," Hoechstetter told a crowd of advocates and lawmakers at the governor's bill signing.

Hoechstetter said that she was one of over 200 women who was allegedly abused by former Columbia University gynecologist Robert Hadden.

Evelyn Yang, the wife of former presidential and mayoral candidate Andrew Yang, has made that claim as well.

Hoechstetter said this window gives her a chance at justice.

"I was sexually abused while I was pregnant with my twin daughters and it is an incredibly full-circle moment to have them here today to see this," Hoechstetter said. 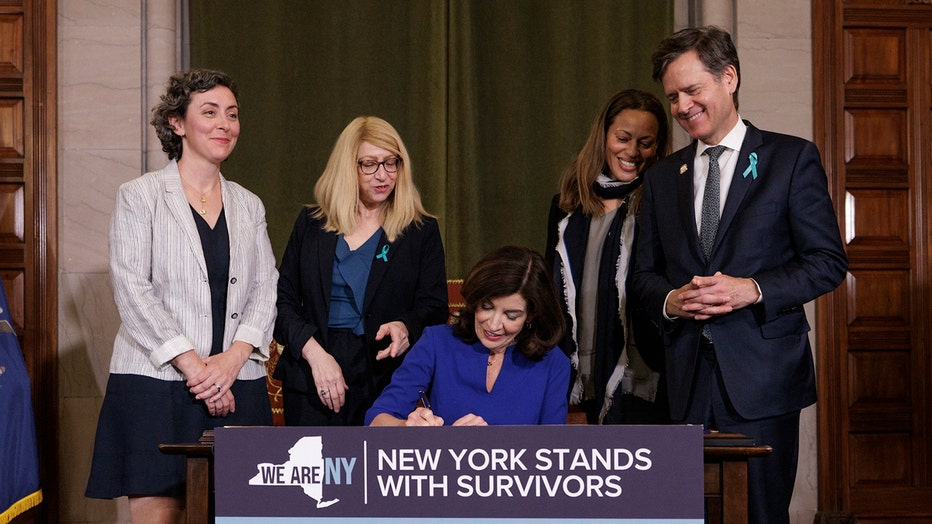 The Adult Survivors Act is modeled after the Child Victims Act, which allowed people who were abused as kids to pursue civil litigation for one year. More than 11,000 survivors of childhood sexual abuse filed court claims after it was approved in 2019.

Assemblywoman Linda Rosenthal, the Assembly sponsor of the bill, said this is only the beginning.

"There are untold numbers who have kept it quiet," Rosenthal said. "And I expect people will now say, 'I have this opportunity: Do I take it, do I not?'"

The Adult Survivors Act passed unanimously in the state Senate twice but stalled in the Assembly until this year. Some opposition stemmed over how far back some of these lawsuits might reach, possibly making it complicated for institutions and their insurance companies.

However, Liz Roberts, the chief executive officer of victims' services firm Safe Horizon, said that at the end of the day, survivors will still have to make their case in court.

"Anybody that brings a case under this look-back window will still have to prove their case," Roberts said. "And anybody who is a defendant on such a case will still have the opportunity to put forward a strong defense and they will still have all of the protections of due process."

This-one year window that will allow adult survivors of sexual abuse to file a civil lawsuit will start in six months in order to give people time to find attorneys and build a case.

Lawsuits only have to be filed by the end of this one year; they do not have to be resolved within that time.