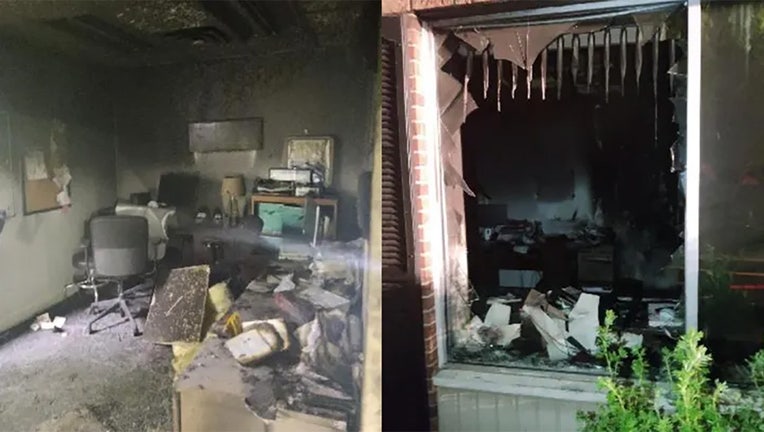 Photos released by CompassCare show damage to its building.

NEW YORK - An arson investigation is underway after an anti-abortion pregnancy center outside of Buffalo was allegedly firebombed.  It happened Tuesday morning at CompassCare.

"Early this morning police and firefighters responded to smoke at CompassCare’s Buffalo office. The building was firebombed. The windows in the reception room and nurses’ office were broken and fires lit," CompassCare said in a statement.

"This is the pro-abortion ‘Kristallnacht’," CompassCare CEO Jim Harden said in a Facebook video.

Graffiti allegedly left on the building refers to the group Jane’s Revenge that allegedly firebombed a pro-life organization in Madison, Wisconsin.  It read "Jane was here."

Two firefighters who responded to the scene were treated for minor injuries, the Amherst police department said in a news release.

The Amherst police did not announce a suspected motive in the case. The FBI did not say if it was involved in the investigation.

Harden said CompassCare provides free health care to women and encourages them to seek alternatives to abortion. The Buffalo office serves about 20 patients each week, he said.

The building suffered extensive damage and operations will be moved.

The fire took place in the same Buffalo suburb where Dr. Barnett Slepian was murdered by an anti-abortion extremist in 1998.