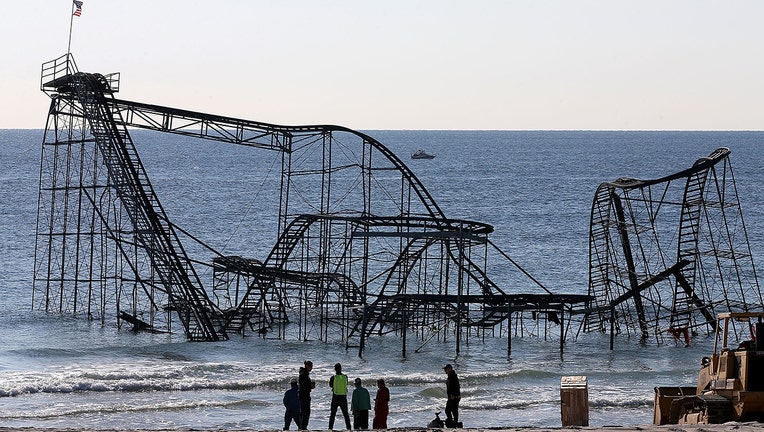 Workers prepare to remove the Star Jet roller coaster that has been in the ocean for six months after the Casino Pier is sat on collapsed when Superstorm Sandy hit, May 14, 2013 in Seaside Heights, New Jersey. The Casino Pier has contracted Weeks Mar

ATLANTIC CITY, N.J. - New Jersey will incorporate the impacts of climate change and rising seas into all its major policy decisions in the near future, and will seek to share the costs of protecting the state among all levels of government and the private sector.

A report released Thursday bluntly predicted "it will be increasingly difficult for people to live and work in coastal places as sea-level rise inundation increases," recommending the state incentivize a move away from the riskiest areas.

In its first climate resiliency strategy, unveiled on vacant land in Woodbridge where the state has bought and demolished numerous homes in a flood-prone area, state officials committed themselves to making sure major decisions in most areas of government are made with climate change and its risks in mind.

And while not putting a price tag on anything, the report acknowledges the obvious: this is going to be expensive. To raise additional money for resilience projects, the report lists options including borrowing, taxing, imposing targeted fees, and selling "environmental impact bonds."

"We are ground zero for some of the worst impacts of climate change," said Shawn LaTourette, the state's acting environmental protection commissioner. "We have to get ready for what is happening here today in our state, and what we know is to come."

The report said, "Nearly everything the state spends money on will be impacted by climate change."

The plan seeks to incentivize people to move from flood-prone areas to safer ones, would help low-income communities who are least able to respond to the effects of climate change, and seek new funding for resiliency measures.

The plan also acknowledges what may prove to be an inconvenient truth: the state does not have enough money and resources to build shore protection projects in every vulnerable area along the coast.

"For New Jersey to decrease coastal flood risk, all levels of government, and private and nonprofit organizations should share resilience costs," the report read. "As climate change will require an 'all hands on deck" approach, so too must the financial burden be shared beyond state government."

It called for prioritizing such projects to protect major population and economic centers; critical infrastructure, and socially vulnerable populations.

At the same time, the state said it will support the development of local resiliency plans in every coastal municipality through resources and technical assistance.

The report noted that sea levels could rise by 1 to 2 feet by 2050, and 2 to 5 feet by the end of the century, using moderate projections. A 2018 report by the Union of Concerned Scientists said that over the next 30 years, at least 62,000 New Jersey homes are at risk from chronic flooding. Of those same homes, the report found, 2,600 were rebuilt after Superstorm Sandy in 2012.

The plan recommends designating "sea-level risk zones" and discouraging development in them.

It also advocated measures that government and environmentalists have long agreed are necessary, including incorporating nature-based solutions like wetlands restoration and establishment of oyster reefs as alternatives to hardened engineering solutions like sea walls and bulkheads where feasible.

Private property owners along the coast who do so, replacing a bulkhead with a "living shoreline," could be rewarded with tax rebates or credits, the report suggested. Similar tax incentives could be offered to development projects built in less-risky areas inland.

Elevating buildings in flood-prone areas is a long-term solution only if local governments commit to maintaining nearby infrastructure and utilities "in perpetuity," the report read.

As far back as 1981, New Jersey realized a need for programs to encourage relocation from coastal hazard areas. As of February, its Blue Acres program had bought and demolished nearly 700 properties in flood-prone areas.

But none has been in an oceanfront area, where land is simply too valuable to walk away from.

Jeff Tittel, director of the New Jersey Sierra Club, said the plan it too vague.

"The new resilience strategy is really a strategy to avoid bold action," he said. "There are no strong measures, it is a plan to make a plan."