A husband and wife in Pennsylvania were credited for saving the life of their neighbor after he had a heart attack on their front porch.

Chris Favorin of York Haven felt that something wasn’t right on Friday, Aug. 5. He was in the middle of a workout, he said, when he started to not feel well.

"I was finishing up doing a set of 100 jumping jacks when about halfway through I couldn’t lift my arms past my shoulders and started to feel real tightness in the chest, like my heart wouldn’t come off of 100%," he said.

He and his fiance were searching for the nearest medical clinic when he realized that’s where his neighbor works, and he noticed both cars in his neighbor’s driveway so he walked over.

The harrowing minutes that came next were caught on camera.

Christopher and Rachel Mowry’s security camera recorded Favorin walking up to their front porch and ringing their doorbell, in an obvious sign of distress. He leaned over to rest his arms along the porch’s railing before getting down on his hands and knees just seconds later.

He eventually laid down — and that’s the last thing Favorin said he remembers. 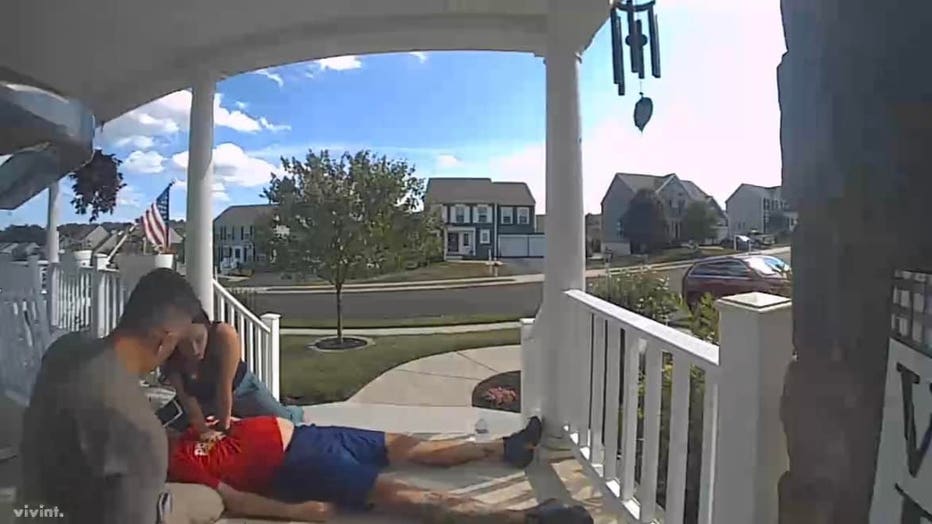 The Mowrys came outside and, while conversing with another neighbor, called 911. That’s when Rachel said Favorin’s pulse disappeared.

The Mowry’s security video was edited to not show the moments Favorin went into cardiac arrest, but they shared still images of them administering CPR. Christopher is a York Area United Fire & Rescue firefighter/EMT and Rachel is a nurse practitioner.

"Our neighbor experienced 10/10 chest and left arm pain. He came to our porch and rang our doorbell for help. Just 2 min after ringing the doorbell and Rachel and I answering he went into cardiac arrest," Christopher Mowry shared on Facebook.

Christopher Mowry said they started CPR immediately and that paramedics used a defibrillator when they arrived on scene. Fourteen minutes later, Favorin’s pulse was regained.

But Rachel, who rode along to the hospital, said his pulse was lost a second time as they were en route.

Favorin’s pulse was regained again and Rachel said he started talking in the ambulance, making a point to say his wedding was in five weeks and they needed to make sure he "made it there."

Favorin showed immediate improvement at the hospital after removal of a total blockage of the left anterior descending (LAD) artery, Christopher Mowry shared, commonly known as the "widow maker."

In addition to the CPR photos, Christopher Mowry also shared photos from just 96 hours later when Favorin showed up on their doorstep again — but this time to say thank you. Favorin can be seen embracing both Christopher Mowry and Rachel. 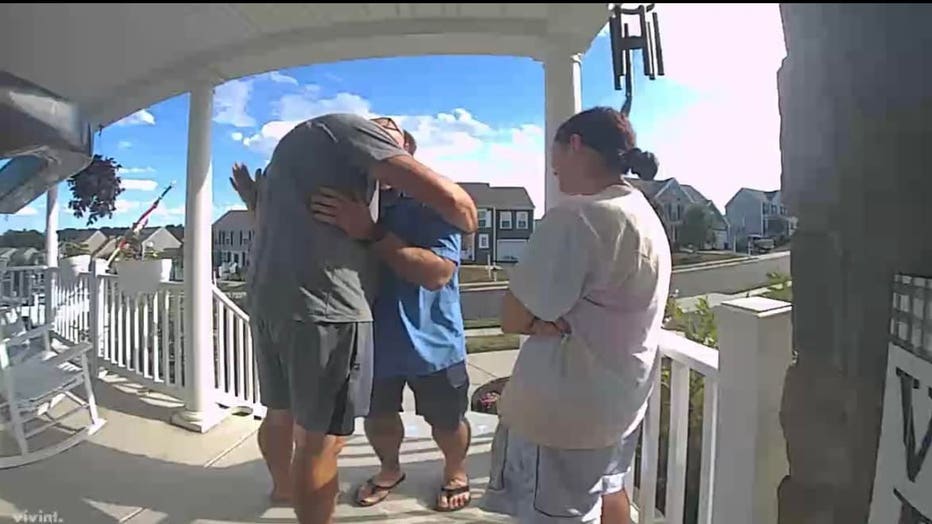 "The point of this post is (to highlight) the importance of immediate CPR and defibrillation," Christopher Mowry wrote on Facebook. "Rachel and I simply did our job. Take our careers out of the equation and anyone who took a CPR class could have taken our place."

It’s a sentiment the York County Office of Emergency Management echoed when they honored the Mowrys earlier this week for their life-saving endeavor.

"Aside from this great story, the fact is that anyone can administer CPR and save a life if they undergo the training," the office wrote.

The York County community is now rallying behind this survival story and encouraging everyone to be trained in CPR. The Mowrys organized a neighborhood class and the University of Pittsburgh Medical Center is offering several free CPR classes.

"This is the craziest event in my 24 years of doing this," Christopher Mowry wrote. He said he’s sharing their story "in hopes to save a life from a friend, neighbor, advice giver, and whiskey drinkin partner."

A so-called "widowmaker" heart attack has a reputation for being especially dangerous because a lot of damage can be done to the heart muscle if blood flow isn’t restored quickly, Cleveland Clinic explains. The LAD artery "serves such a big portion of the heart."

You can read more about hands-only CPR from the American Heart Association and find a training center near you.