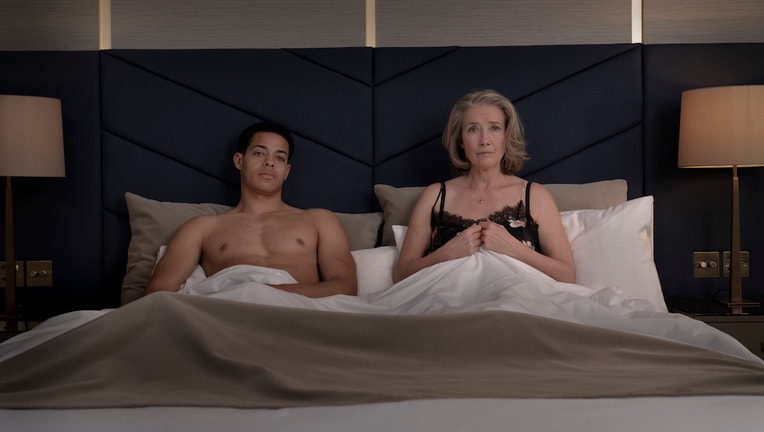 CHICAGO - Editor's note: This review originally ran as part of our coverage of the 2022 Sundance Film Festival on Feb. 4, 2022. It has been expanded and republished in light of the film's premiere on Hulu.

"Good Luck to You, Leo Grande" would make a hell of a play. It’s quite the movie, too, but this lovely story from director Sophie Hyde and screenwriter Katy Brand is easy to imagine on a stage: It’s divided into scenes of continuous action, takes place almost exclusively in the same single location and focuses (with one brief exception) on the same two people, alone together. When a film’s locus is limited in this way, it’s often the result of translation — what was once a play makes the leap to the screen without altering its small scale, for better or worse (or both). But "Leo Grande" didn’t begin life as a play. While it would almost certainly be a great one, there’s no denying that the intimacy of the story and subtlety of the acting make it a perfect fit for the equally intimate and subtle medium of film. And there’s one other big upside to this story being told on screen: If "Leo Grande" were a play, far fewer people would get to see Emma Thompson’s remarkable performance.

About "Good Luck to You, Leo Grande": A duet with depth

Thompson plays Nancy, a retired schoolteacher and recent widow who has never had great sex. As far as she can tell, she’s never even had good sex — her experiences have peaked around "unobjectionable." But she’s determined to do something about that, no matter how nervous or uncomfortable it make her. So she takes action: She books an upscale hotel room and hires a young sex worker, the titular Leo Grande (Daryl McCormack). Leo isn’t what she expects, however — he’s quietly playful and intelligent with a calming presence, a man who enjoys and takes a great deal of pride in his work. And so Nancy sets out on her journey of self-discovery, but the more time she spends with Leo, the more she wants to peer beneath the sophisticated veneer he presents. 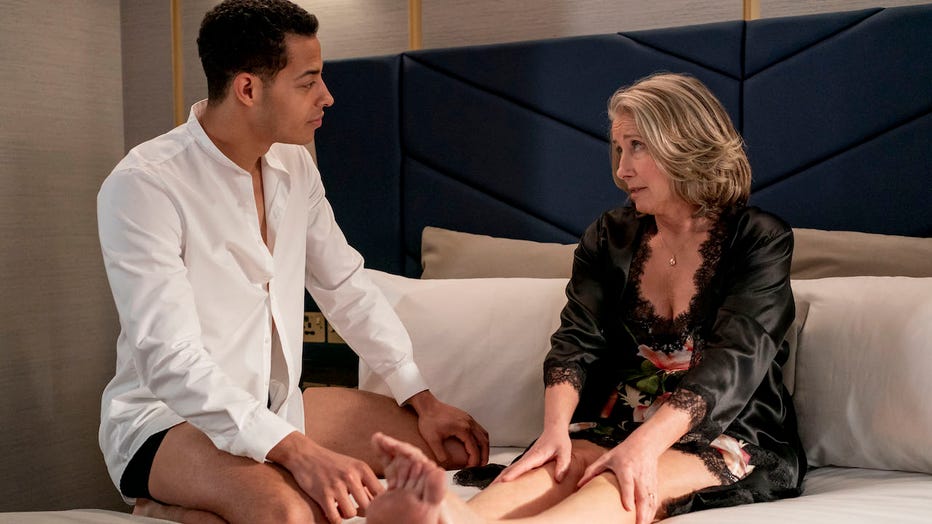 As the film opens, Hyde’s camera often stays at a respectful distance from Nancy, particularly when she’s visibly uncomfortable (not a rare occurrence) — like Leo himself, the director seems to want to put her protagonist at ease and is more than happy to take things slowly. But as Nancy’s tension eases, Hyde draws nearer, essentially granting the audience a front-row seat to watch Thompson do her thing while at the top of her game.

But then again, when isn’t she at the top of her game? 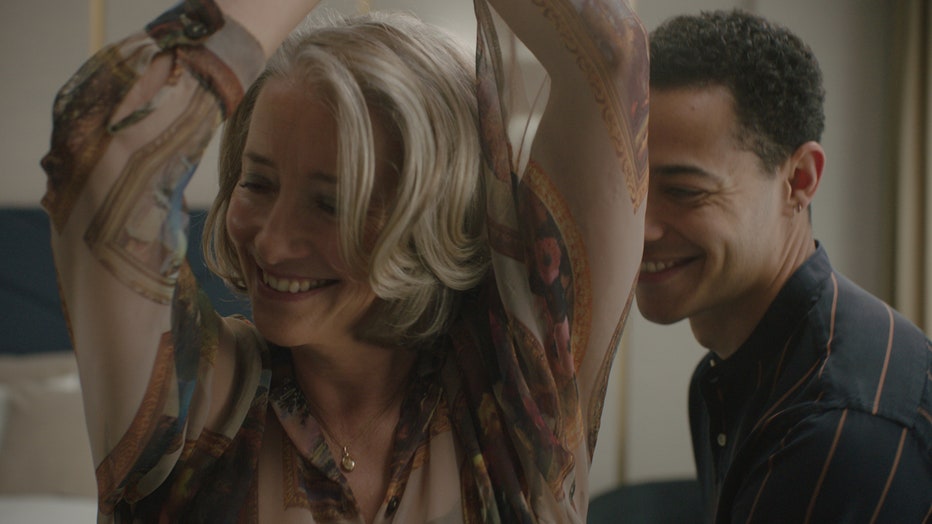 See "Good Luck to You, Leo Grande" for: A seasoned pro at her best and a captivating newcomer

Even in a career filled with terrific, wide-ranging performances, Thompson’s turn here stands out. Nancy Stokes crackles with intelligence, a quality she shares with many of the other characters Thompson has played over the years (and that Thompson seems to have in real life as well). Nancy is immensely appealing as a protagonist, but Thompson never allows her to lose a certain amount of thorniness. She is a person, not a heroine. (Okay, she’s a little bit of a heroine.)

WATCH FREE ON TUBI: Emma Thompson in "The Remains of the Day" — get the app

McCormack’s performance, in contrast, doesn’t seem nearly as complex right off the bat, but as the film progresses and the dynamic shifts, it becomes clear exactly how layered his work has been in creating the Leo Grande persona while leaving the occasional crack or fracture that reveals part of the person beneath. Yet long before those ripples skim across Leo’s surface, McCormack’s contribution to the film is still every bit as vital as Thompson’s. It’s the quality of his attention, an awareness that seems to extend beyond Nancy and right through the screen. Watching "Leo Grande," the audience isn’t in the place of a voyeur. It’s as though they’re perched on the edge of that hotel bed alongside Nancy, so focused and enveloping is McCormack’s lively yet contemplative gaze. 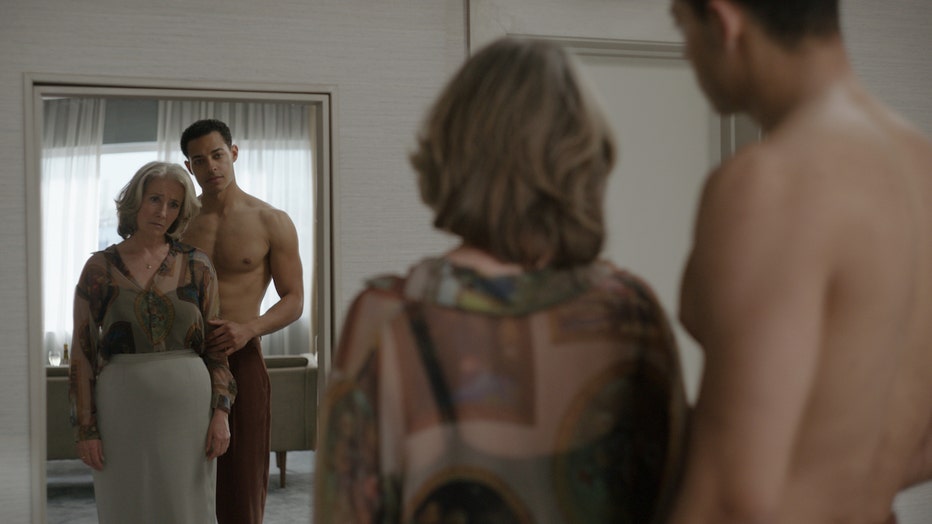 While "Good Luck to You, Leo Grande" could be called a crowdpleaser, it won’t be for everyone. That’s not due to the film’s sexuality, nor its moments of palpable discomfort. (There are lots of those.) It’s the combination of the film’s intimate scope and Leo Grande’s warm, all-seeing gaze. It can be overwhelming, and Nancy won’t be alone in finding it difficult to surrender to the fantasy. "Good Luck to You, Leo Grande" requires a leap on the audience’s part, an acceptance of the inherent theatricality of the premise and a willingness to be romanced and uncomfortable all at once. But if you can make that leap, the rewards are considerable. Maybe not as considerable as those Nancy is searching for, but an absolute pleasure all the same.

Make it a double feature with "Sense and Sensibility," streaming free on Tubi

Sense and Sensibility (1995): Other than William Shakespeare, there’s no one more influential on the modern day romantic comedy genre than Jane Austen. And the early 19th century novelist gets one of her best-ever adaptations in this winning romance from director Ang Lee and writer/star Emma Thompson. With its classic story of polar opposite sisters — the reserved, responsible Elinor (Thompson) and the expressive, emotional Marianne (Kate Winslet) — "Sense and Sensibility" basically delivers two rom-com storylines in one. So whether your dream is to hit it off with a charmingly humble Hugh Grant or get stuck in a dramatic love triangle with Greg Wise and Alan Rickman, there’s something for everyone here. Rated PG-13. 136 minutes. Dir: Ang Lee.

"Sense and Sensibility" is streaming free on Tubi — get the app

How to watch "Good Luck to You, Leo Grande"

This Sundance darling begins streaming on Hulu on June 17.