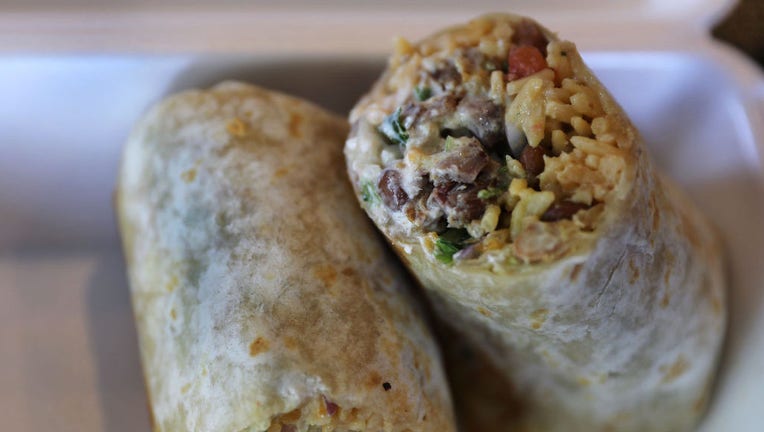 FILE IMAGE - A burrito is pictured at a restaurant on May 22, 2019, in Boston, Massachusetts. (Photo by Pat Greenhouse/The Boston Globe via Getty Images)

Grubhub offered a deep dive into what its customers ordered the most in 2022: a lot of burritos, beer, and iced coffee.

The food delivery service shared its annual report on national food ordering trends and eating habits, calling it "a year of takeout wrapped in layers of comfort."

The No. 1 order of the year was the burrito, a jump from No. 8 in 2021. The dish, which included everything from sausage and egg burritos to ones filled with guac and sour cream, was ordered more than 4 million times in 2022, according to Grubhub.

RELATED: Here are the most-searched recipes of 2022, according to Google

Because of the burrito’s top spot, Grubhub said Chipotle is offering $5 off orders of $20 or more for Grubhub+ members through Dec. 31. No promo code is needed, as the offer will automatically be applied at check-out on eligible Chipotle orders in the Grubhub app.

Followed by the burrito, cheeseburgers, cheese pizza, pad Thai, and chicken quesadillas rounded out the top five most ordered foods.

The top breakfast orders of the year were sausage, egg + cheese sandwiches, doughnuts, sausage burritos, bagels with cream cheese, and muffins. Denver ranked No. 1 in the most "early bird breakfast orders," meaning those ordered between 5 a.m. – 8 a.m., Grubhub said.

RELATED: Need a vacation? These were the most popular travel destinations in 2022

Boston placed the most late-night orders — or those placed at 10 p.m. or later. The top orders for late-night eating were chicken quesadillas, followed by fried chicken sandwiches, cheeseburgers, mozzarella sticks, and cheese pizza, Grubhub said.

"The top breakfast order, lunch order, and late-night order provided portable, one-dish meals that allowed diners to work and eat, scroll and eat, even stream and eat," Grubhub said in its report.

Tiramisu and Baklava were among the country’s top dessert picks, ordered more than 44,000 and 35,000 times each, the report said.

When it comes to beverages, 2022 was the "year of the beer," ranking No. 1 for alcohol orders. Plenty of Americans also had their daily caffeine delivered, with iced coffee ranking as the most ordered form of coffee.

"‘Iced coffee over everything’ was the motto—regardless of the temperature outside," Grubhub said in its report. "It became a daily routine, getting that coffee-to-milk ratio just right. America chose oat milk to do the trick. In fact, oat milk was preferred 4:1 over almond milk this year. "

Scientists say coffee might be good for your bones

A recent study shows there may be a positive link between coffee consumption and bone health.

America’s most ordered dishes of 2022, according to Grubhub