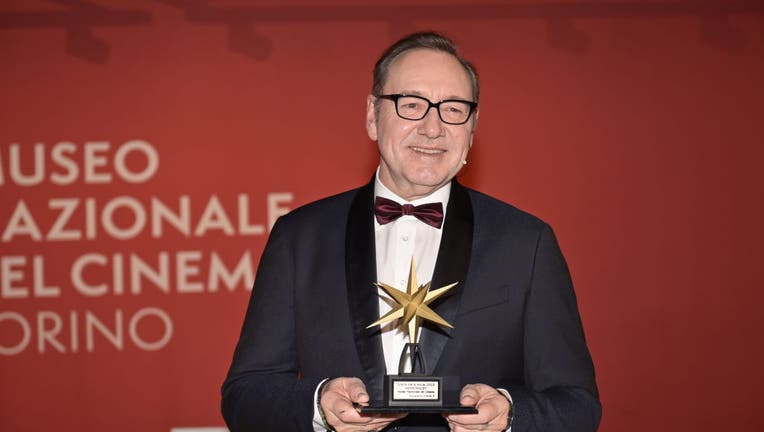 TURIN, Italy (AP) - Making his first speaking appearance since #MeToo-era allegations derailed his career, actor Kevin Spacey used a colorful Italian term to thank the National Cinema Museum in the northern city of Turin Monday for having the courage to invite him.

Spacey received a lifetime achievement award from the museum, discussed key roles during a master class and then introduced the 1999 film "American Beauty," for which he won his second acting Oscar, to a sold-out crowd.

"I am truly blessed and grateful and humbled. And my heart is very full tonight toward the National Museum of Cinema for having had the "le palle" to invite me tonight," Spacey said, using the Italian word for a male body part synonymous with courage, to cheers from the master class audience.

"By presenting this award, they are making a strong defense of artistic achievement and for that they should be applauded," Spacey said.

A jury in the Kevin Spacey sexual assault trial found that the actor is not liable for battery against Anthony Rapp. Rapp alleged that Spacey climbed on top of him at a party in 1986, when Rapp was 14 and Spacey was 26.

The sold-out events were billed as Spacey’s first speaking engagements in five years. After multiple allegations of sexual assault surfaced, the two-time Academy Award winner lost his starring role on the Netflix series "House of Cards" and saw other opportunities dry up.

Spacey did not directly address the allegations while accepting the award or during an hour-long master class. But while noting the loyalty of many fans, he said "the bond I share with them will not be easily broken by unrestrained, ever-shifting mobocratic ties."

He choked up as he thanked his manager Evan Lowenstein for his support, calling him "the brother I never had."

Spacey said he was also "enormously grateful" to Italian director Frank Nero, who hired him for a role in his new film "The Man Who Drew God," which was filmed in Turin. Spacey will be on hand when the film will be previewed later this week in Rome.

After the master class, fans lined up to take selfies and get DVDs signed.

"I actually miss him, and I think he had a great role in the cinema. He made Netflix what it is today," said Chiara Ottolini, referring to the enormous success of "House of Cards." "I am so happy to see that he is coming back, because we have to separate the man and the artist.’’

Prosecutors dropped groping charges against actor Kevin Spacey, who was accused of groping a young man at a Massachusetts resort bar in 2016.

Mary Bicci made the hour-long train trip from Milan to see Spacey, who she regards as one of the best actors ever.

"When the scandal happened, I went into mourning because I knew very well that they would ostracize him right away," she said.

Spacey is scheduled to go on trial in London in June on a dozen charges alleging he sexually assaulted four men between 2001 and 2013, including when he was the artistic director at the city’s Old Vic theater. He has pleaded not guilty.

In October, a federal jury in a New York civil case found that Spacey, 63, did not sexually abuse actor Anthony Rapp when both were relatively unknown Broadway actors in 1986 and Rapp was 14 years old. The jurors deliberated a little more than an hour before deciding that Rapp, now 50, hadn’t proven his allegations.

Spacey previously faced allegations in Massachusetts that he groped a man at a bar. Prosecutors later dropped the charges.

A judge in Los Angeles in August approved an arbitrator’s decision to order Spacey to pay $30.9 million to the makers of "House of Cards" for violating his contract by sexually harassing crew members.

Elena Cortini, a university design student who was seeing "American Beauty" for the second time, said she didn’t know what to make about the allegations. She said she was a film buff, and preferred to focus on the craftsmanship in the 1999 film.

"If he is putting is life back together as he said, good for him," she said.