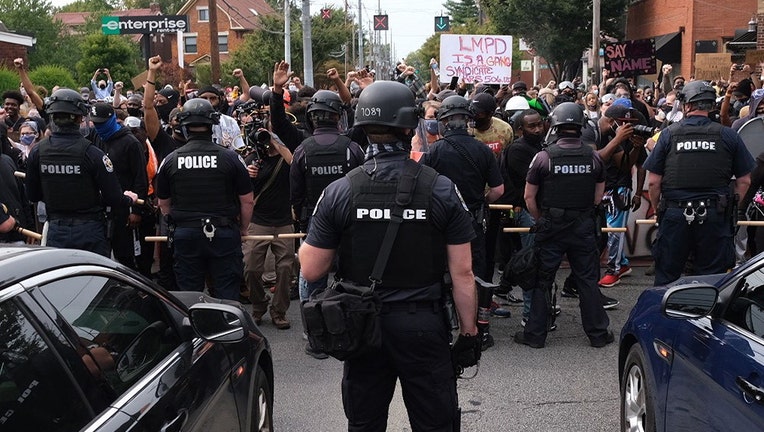 Riot police block protesters in Louisville, Kentucky, on September 23, 2020. - A Louisville police officer was charged Wednesday with three counts of "wanton endangerment" in connection with the shooting of Breonna Taylor, a 26-year-old black woman w

Kentucky lawmakers are considering a controversial proposal to make it a crime to insult a police officer.

The bill would amend the Kentucky Penal Code to make it a disorderly conduct charge as a second-degree offense if a person "Accosts, insults, taunts, or challenges a law enforcement officer with offensive or derisive words, or by gestures or other physical contact, that would have a direct tendency to provoke a violent response from the perspective of a reasonable and prudent person."

It would be a Class B misdemeanor unless it happened during an event classified as a riot.  If the taunting occurred under those conditions the person could face three months in jail and a $250 fine.

Anyone convicted would also be disqualified from receiving any public assistance benefits for three months.

The measure is part of a larger bill related to riots.

The Kentucky branch of the American Civil Liberties Union has come out against the proposal.

The ACLU said it was an "extreme bill" in a Twitter posting:  "It's so extreme it would make it a crime to say 'insulting' or 'offensive' things to law enforcement."

A Senate committee advanced the bill last week, according to the Louisville Courier Journal.