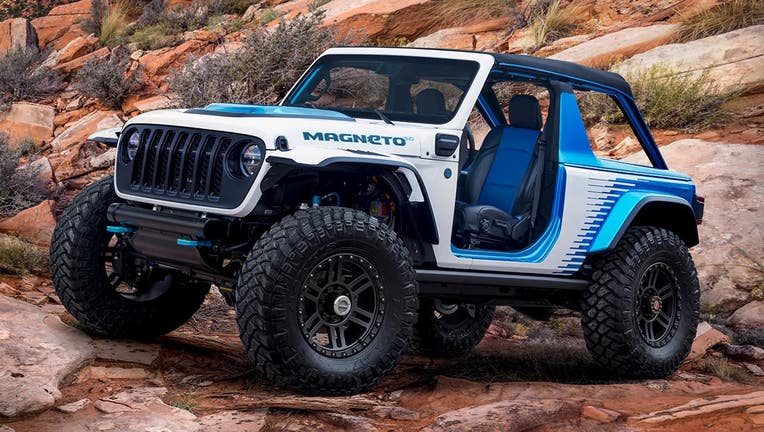 Ford may have the F-150 Lightning, but the Jeep Wrangler Magneto 2.0 is lightning-quick.

The all-electric SUV concept is making its debut at the Easter Jeep Safari off-road festival in Moab, Utah, on April 9 along with six other custom vehicles meant to showcase Jeep parts and possibilities for future models.

The Magneto is built on a Wrangler frame that's been stretched by a foot to fit its new powertrain, which includes four battery packs with a combined capacity of 70 kilowatt-hours and a flux axial electric motor rated at 625 hp and 850 lb-ft of torque that drives the wheels through a conventional six-speed transmission and 4x4 system.

It's also equipped with what Jeep calls an "electronic nitrous oxide system" that cranks up the amps for short sprints and allows it to accelerate to 60 mph in two seconds. That's quicker than a modern Formula One car and on par with the Tesla Model S Plaid, and the Jeep does it with 40-inch all-terrain tires and a three-inch suspension lift.

While the Magento is the most extreme machine heading to Moab, Jeep are also showing off several other creations, including the Jeep Rubicon 20th Anniversary Concept which celebrates the top of the line model, the Jeep '41 Concept which combines WWII style with a plug-in hybrid powertrain and the Jeep Grand Cherokee Trailhawk PHEV Concept,  is an extreme off-road version of the new Grand Cherokee 4xe plug-in hybrid.