In response to numerous complaints from residents, the city of Richmond is attempting to remove a decomposing whale carcass from the Point Richmond shore.

RICHMOND, Calif. - In response to numerous complaints from residents, the city of Richmond is attempting to remove a decomposing whale carcass from the Point Richmond shore.

The whale has caused quite an odor that nearby residents have been frustrated by for nearly two weeks. The city is looking at trying to bury the whale on the beach on Thursday when the tide is low in the afternoon.

Workers contracted by the city of Richmond made a first attempt at burying the whale on Wednesday, but the wheel-mounted equipment sunk into the soft sand.

Tom Butt, the mayor of the city of Richmond, was optimistic that a second attempt using different equipment on Thursday would succeed in burying the carcass and removing the stench.

"One way or another, the city of Richmond is going to take care of this," Butt said.

"We tried for 10 days to get other agencies to do it, and they just won't touch it," he said, noting that the Army Corps of Engineers should have taken responsibility for removing the carcass, but did not."We're going to deal with it where others won't."

The Army Corps of Engineers first spotted the carcass of an adult gray whale in April in the waters near Alameda, and because it caused a navigational hazard for ferry boats, brought it to Brooks Island off the Richmond shores for it to decompose naturally and be a food source for other animals.

Unfortunately, the tides pulled it loose from where it was tethered, and it washed up on the shores of Waterline Beach between Seacliff Drive and Canal Boulevard over Memorial Day weekend.

Since then, residents have endured what can only be described as an extremely foul odor.

"The whale has created a real problem in that it really does stink," said Michael Fallon, a Point Richmond resident. "I mean, to the point where if you're downwind of it, you're going to be gagging. It's a dead whale and dead whales stink."

One challenging aspect of this issue is the fact that the whale is so far into the decomposing process, it can’t be moved.

The Army Corps of Engineers says towing it would cause the carcass to break into pieces, which is why they are suggesting burying it.

Butt said the city had explored an idea of chopping up the carcass and bringing it to a local landfill, but no facilities would accept animal remains. 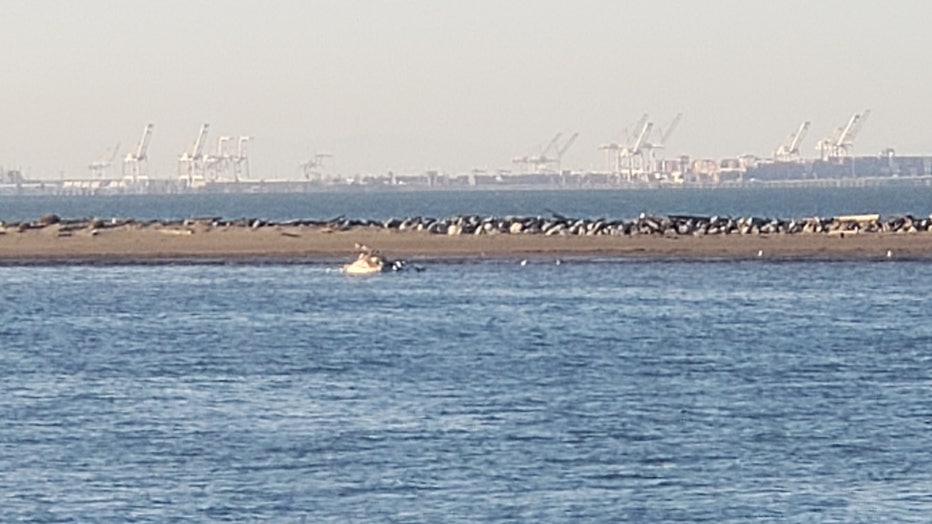 A dead whale was spotted off Brooks Island in Richmond. May 20, 2022 Photo: Phillip Walton