Chemicals used in plastics called phthalates have reportedly been detected in fast-food items, according to researchers.

In a study published Tuesday in the Journal of Exposure Science & Environmental Epidemiology, a team led by George Washington University examined 64 samples of hamburgers, fries, chicken nuggets, chicken burritos and cheese pizza, as well as food-handling gloves, from a handful of restaurants, analyzing them for 11 chemicals using gas chromatography-mass spectrometry.

The restaurants selected were located in San Antonio, Texas, and fast-food items – the most commonly ordered foods with standard toppings and fillings – were sampled in two phases from 2017 to 2018.

In research from 2016, the group said it had found that foods categorized as meats or grains were associated with higher exposure to both di(2-ethylhexyl) phthalate (DEHP) and plasticizer dioctyl terephthalate (DEHT).

In 2017, the authors sampled the items from the restaurants, with two separate locations per chain and a smaller selection of foods was sampled in the second phase.

Because "relatively low" chemical concentrations were observed in pizza and chicken nuggets in the first phase, those items were not re-sampled in 2018 during phase two.

In September of that year, the researchers sampled hamburgers, fries and chicken burritos from three of the same chains, with an additional third location for two of the chains.

Foods were purchased on the same day and all items had been ordered and packaged separately to avoid-cross contamination. They were transported back to the lab in a cooler in the same packaging.

A single polyurethane foam plug served as the field blank for each restaurant during each sampling phase and the samples were frozen at −20 °C until analyzed.

Phase two also collected one pair of gloves at each restaurant. 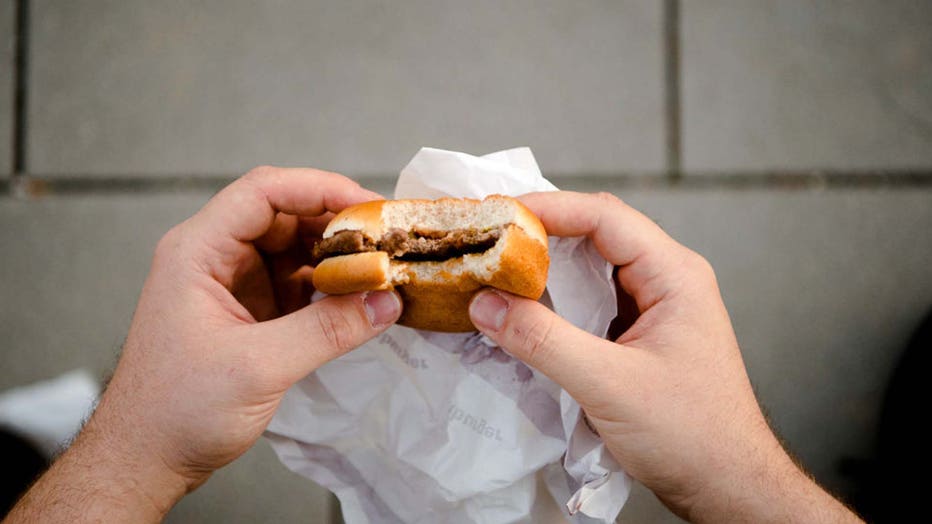 FILE - A man sits outside on a bench eating a hamburger.

DEHT was not detected in fries and concentrations of the chemical were significantly higher in burritos than hamburgers.

Cheese pizza had the lowest levels of most chemicals.

"A selection of popular fast-food items sampled in this study contain detectable levels of replacement plasticizers and concerning ortho-phthalates. In addition, food handling gloves contain replacement plasticizers, which may be a source of food contamination. These results, if confirmed, may inform individual and regulatory exposure reduction strategies," the researchers wrote.

The work was supported by the Passport Foundation, Forsythia Foundation and Marisla Foundation, groups that support environmental and health issues.

While National Restaurant Association Senior Vice President Larry Lynch told USA Today that the study was "looking to incite fear and make headlines," the U.S. Food and Drug Administration (FDA) told the Washington Post that it would review the findings.

Phthalates – often called plasticizers – are used to make plastics more durable, according to the U.S. Centers for Disease Control and Prevention (CDC). Others are used to help dissolve different materials.

Phthalates are in hundreds of products like vinyl flooring, lubricating oil and personal-care products. Those in polyvinyl chloride plastics are used to make products like plastic packaging, garden hoses and medical tubing.

Exposure to phthalates occurs when eating or drinking foods that have contacted products containing phthalates – though some exposure can occur from breathing in phthalate particles.

While some types of phthalates have affected the reproductive system in animals, human health effects from exposure to low levels of phthalates are not as clear.