Republican Florida Representative Greg Steube pulled out several guns as he took part in a debate on gun control via video call on Thursday.

A House panel advanced legislation Thursday that would raise the age limit for purchasing a semi-automatic rifle from 18 to 21 as Democrats moved quickly to put their stamp on gun legislation in response to mass shootings in Texas and New York by assailants who used such weapons to kill 31 people, including 19 children.

In addition to raising the age limit for purchasing semi-automatic rifles, the bill also would make it a federal offense to import, manufacture or possess large-capacity magazines and would create a grant program to buy back such magazines.

Steube brandished various pistols in arguing that the bill's provision banning large-capacity magazines of more than 10 rounds amounted to stopping law-abiding citizens from purchasing guns of their choice. 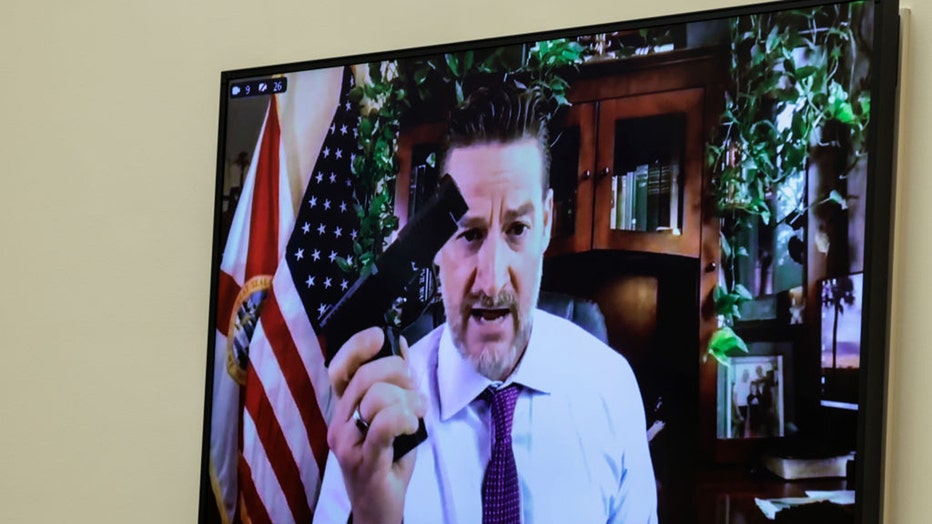 When Rep. Sheila Jackson Lee, D-Texas, remarked that she hoped one of the guns Steube was holding was not loaded, Steube replied, "I’m in my house, I can do whatever I want with my guns."

It was one of several pointed exchanges during the hearing.

Here's a gun I carry every single day to protect myself, my family, my wife, my home. This is a XL Sig Sauer P365. It comes with a 15 round magazine. Here's a seven round magazine, which would be less than what would be lawful under this bill, if this bill were to become law. It doesn't fit. So this gun would be banned."

Rep. Sheila Jackson Lee, D-Texas: "I hope the gun is not loaded."

Steube: "I'm in my house, I can do whatever I want with my guns."