I-95 Shutdown: What went wrong?

There are still so many questions about how the situation on i-95 got out of hand. FOX 5's Maureen Umeh has the latest.

WASHINGTON - A Baltimore bakery gave away loaves of bread and rolls to stranded motorists who were stuck on Interstate 95 in Virginia following a blizzard that shutdown one of the nation’s busiest highways.

According to the Washington Post, Casey Holihan and her husband, John Noe, were stranded on the interstate near Quantico when they spotted a Schmidt Baking Company truck Tuesday morning after spending the night in their vehicle.

The winter storm blasted the mid-Atlantic Monday with an unusually heavy snowfall for the region. The snow, coupled with a string of bad crashes, paralyzed a 50-mile stretch of I-95 between Richmond and Washington, D.C. stranding many overnight. 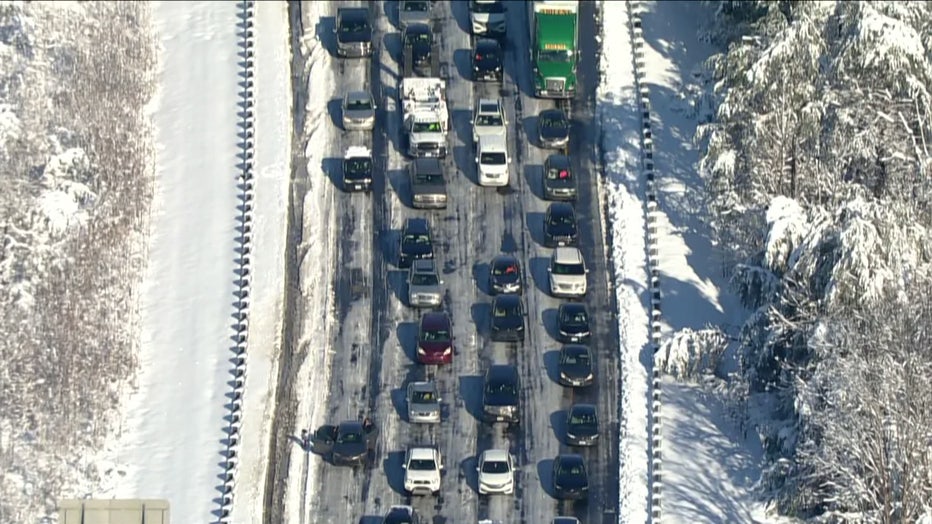 The couple called the company and left a message not expecting to get a response. To their surprise, Chuck Paterakis, a co-owner of H&S Bakery which operates Schmidt Baking Company, called them directly, the Post reported.

Paterakis instructed the driver of the truck to give a package of rolls and one loaf of bread to any person in need. Holihan and Noe helped the driver distribute them to dozens of stranded motorists.

The chaos was finally resolved late Tuesday when highway crews were finally able to clear the roadways of snow and ice allowing trapped vehicles to proceed.

I-95 Shutdown: Dialysis patient stranded on I-95 back home after rescued by Virginia emergency crews

Anthony Oden is back home after spending much of the last two days stuck on Interstate 95 in Virginia in the chaos that surrounded the shutdown of one of the nation’s busiest stretch of highway.