An exhibit at the Grammy Museum Experience Prudential Center in Newark showcases the photography of Ernie Paniccioli.

NEWARK, N.J. - Since exploding on the scene in the 1970s, hip hop has become the biggest-selling music genre globally. And capturing its rise from the very beginning was photographer Ernie Paniccioli.

Paniccioli's pictures of now titans of the industry are currently on display at Grammy Museum Experience Prudential Center in Newark, part of an exhibit in celebration of June being Black Music Month.

"Black music is, in essence, American music. It speaks to the experience all of us culturally, historically," Mark Conklin, the director of artist relations and programming, told FOX 5 NY. "And so we wanted to bring together programming and exhibits and events that would celebrate all of that and give a new generation an understanding of how important this music is to us as a people and as a country."

In A Hip Hop Life: Five Decades of Hip Hop Music, Art and Culture, Brother Ernie, as he's come to be known, used his lens to capture the sides of these legendary figures that go beyond the obligatory poses that reflect street toughness. Queen Latifah, LL Cool J, Flavor Flav and Salt-N-Pepa are among those images. When asked about those figures who are now gone, Paniccioli got teary when he saw his pictures of Tupac Shakur, Biggie Smalls, and DMX.

"I remember Biggie said of one of his records he never thought hip hop would come this far," Paniccioli said. 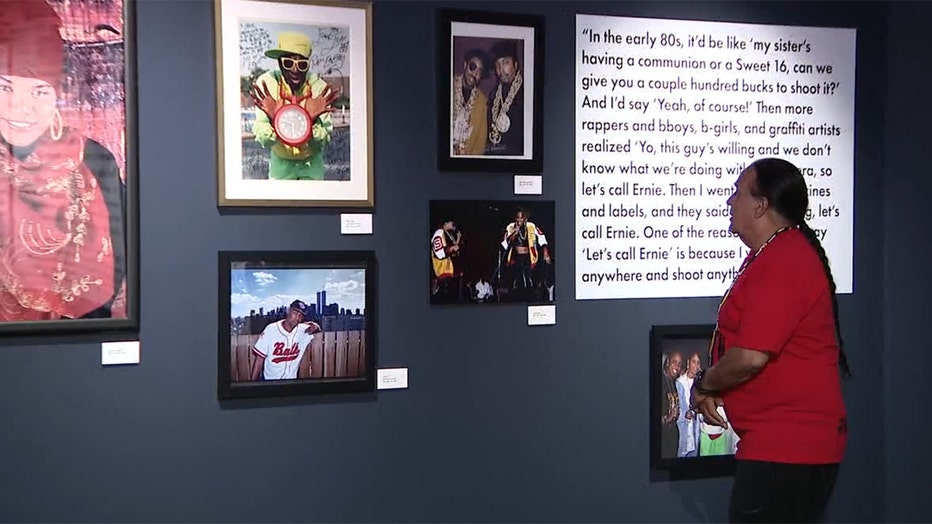 Ernie Paniccioli looks at some of his photos on display at the Grammy Museum Experience Prudential Center in Newark, N.J. (FOX 5 NY Photo)

His pictures have also been published in the coffee table book Hip Hop at the End of the World: The Photography of Ernie Paniccioli.

Now approaching 75, a cancer survivor and still not ready to put away his 35mm Canon, Brother Ernie reflected on his role in spreading the little music genre nobody gave a chance to but now everybody knows.