Abbott called on feds to investigate allegations of abuse at the Freeman Coliseum, where a number of unaccompanied migrant children are being housed.

At the press conference, Abbott called on federal agents to investigate allegations of child abuse and neglect at the Freeman Expo Center, where a number of unaccompanied migrant children are being housed. He also directed the Texas Department of Public Safety and the Texas Rangers to immediately open investigations into the allegations.

Currently, 1,370 unaccompanied migrant children are being housed at the U.S. Department of Health and Human Services’ Emergency Intake Site in San Antonio, according to KSAT.

The Texas Health and Human Services Commission and the Texas Department of Family and Protective Services both received separate tips that allege abuse at the Freeman Coliseum, according to Governor Abbott. The complaints allege that (1) children at the Freeman Coliseum are being sexually assaulted, (2) there is not enough staff to safely supervise the children at this facility, (3) some children in the facility are not eating throughout the day, and (4) children with COVID are not being physically separated from children without COVID.

The governor has previously called the situation at the border a crisis.

Governor Abbott claims this is a direct result of President Biden's refusal to secure the border and his administration's lack of planning for the fallout of his open border policies.

"To end this abuse, the Biden administration must immediately shut down this facility," Abbott said during his press conference. "The children who are in this facility should be moved to other federally-run facilities where the federal government has the space, personnel, and resources to ensure their safety."

Republican Sen. John Cornyn is also calling for a federal investigation into the treatment of the children at this facility following Abbott's press conference.

"Unaccompanied children that arrive at our border have already endured dangerous conditions at home and a treacherous journey to get here," Cornyn said in a statement. "The fact that any child would experience abuse in the care of the U.S. government is despicable. The HHS Inspector General must fully investigate these allegations and the treatment of children at this facility."

Following Abbott’s press conference, Democratic Rep. Joaquin Castro tweeted that Governor Abbot "turned a blind-eye to the Trump administration's grave human rights abuses at the border. If these serious allegations are true, he has a responsibility to put forward the evidence. Migrant children are not political props and must be protected while seeking asylum."

A delegation including Castro and San Antonio Mayor Ron Nirenberg toured the facility last week. They say it actually has the capacity to hold 2,400 and that it’s safe and sanitary.

Before these allegations came out, the White House said Wednesday it was looking for more facilities to accommodate children coming across the border. White House Press Secretary Jen Psaki said, "What we’re focused on is more solutions," adding the goal is to "keep these kids as safe as we possibly can." 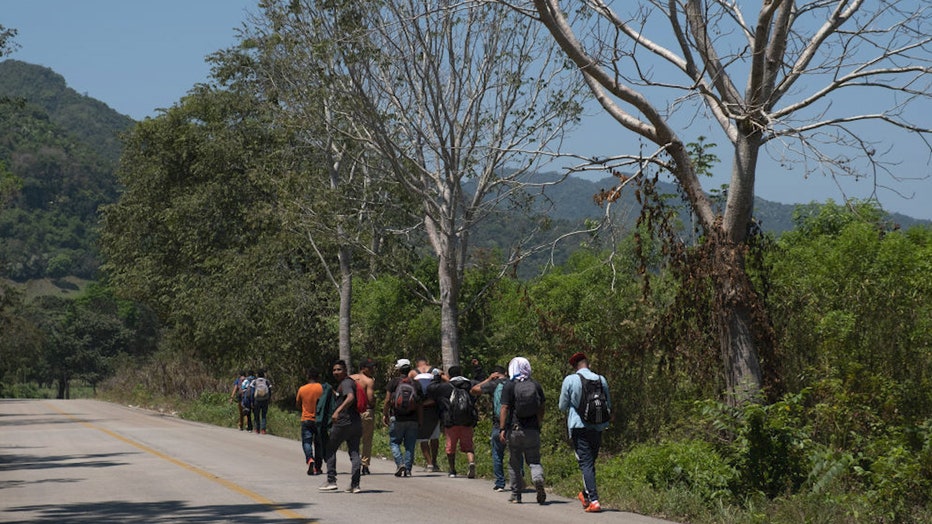 FILE - Migrants, who arrived in caravan from Honduras and Guatemala continue their journey to the United States border, with the dream of obtaining a better employment.

More Americans disapprove than approve of how President Joe Biden is handling the sharply increasing number of unaccompanied migrant children arriving at the U.S.-Mexico border, and approval of his efforts on larger immigration policy falls short of other top issues — suggesting it could be a weak point for the new administration.

A new poll by The Associated Press-NORC Center for Public Affairs Research also shows that solving the problem of young people at the border is among Americans' highest immigration priorities: 59% say providing safe treatment of unaccompanied children when they are apprehended should be a high priority, and 65% say the same about reuniting families separated at the border.