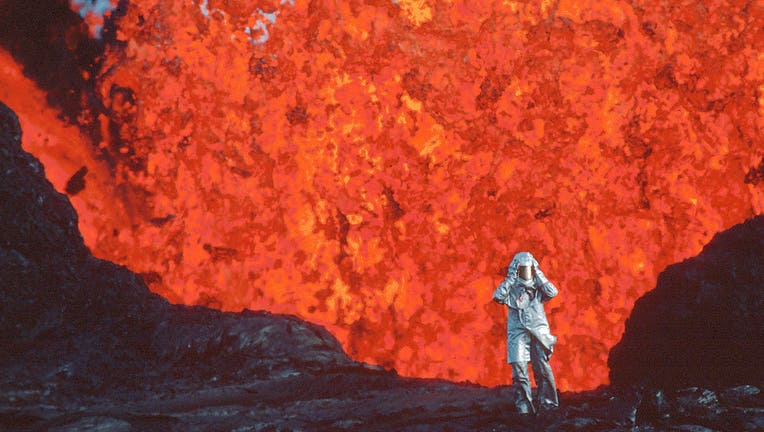 A still from "Fire of Love" by Sara Dosa, an official selection of the U.S. Documentary Competition at the 2022 Sundance Film Festival. Courtesy of Sundance Institute. All photos are copyrighted and may be used by press only for the purpose of news o

Chicago - Editor's note: This review originally ran as part of our coverage of the 2022 Sundance Film Festival on Jan. 21, 2022. It has been republished in light of the film's theatrical release on July 6.

Pick just one of the major elements of this remarkable film — the mind-boggling footage from French volcanologists Katia and Maurice Krafft, Miranda July’s appealingly curious narration, direction that’s equal parts playful and mournful, masterful editing, a real humdinger of a love triangle — and that one element would be enough to make "Fire of Love" well worth approximately 100 or so minutes of your time. (93 minutes to watch, plus at least 10 to recover.) But director Sara Dosa allows all those fascinating pieces to roil together before, yes, erupting into a singular experience.

For a film that begins by telling us its heroes are long since dead, "Fire of Love" strikes an unexpectedly exuberant tone. That stems from its unusual subjects, a daring married couple who spent two decades traveling the world, capturing stunning images of volcanic eruptions. Dosa and team capitalize on the playful stylishness of the Kraffts’ footage, turning to the French New Wave as inspiration. It’s a choice that allows the audience to experience both the awe and joy felt by its subjects as they dance on the edge of destruction, lava spewing liquidly, even puckishly, just beyond their silhouettes. What footage do scientists capture when each day on the job is also a dream vacation? What’s a day at the beach like when the sea is made of fire?

As with many great love stories, the romance becomes richer and more complex with age, as the Kraffts turn away from the bubbly red eruptions to their lethal gray cousins. Death is a constant presence in "Fire of Love," but its meaning to the Kraffts changes as they learn and experience more. It’s here, in the film’s more mournful second half, that Dosa really gets cooking. In the poetry of this precious scientific footage, Dosa unearths meditations on love, life, art, discovery, film, sacrifice and joy — and in doing so she brings the film back around to its early ebullience. When lava erupts from the earth, you see it raining furiously down. But if you shift your gaze past that veil of fire, you can also see it soaring up, up, up. Dosa, like the Kraffts, sees both at once, and her audience is all the richer for it.

Make it a double feature with "The Truth is in the Stars," streaming free on Tubi

The Truth is in the Stars (2007): This tight documentary (it clocks in at just under 90 minutes, or around 9 Blue Origin missions) sees William Shatner enter into conversation with scientists and artists alike on the subject of "how the imaginative optimism of ‘Star Trek’ influenced multiple generations." Rated TV-14. 86 minutes. Dir: J. Craig Thompson. Also featuring Stephen Hawking, Ben Stiller, Gene Rodenberry, Neil deGrasse Tyson, Whoopi Goldberg.

How to watch "Fire of Love"

"Fire of Love" is in select theaters nationwide. It is not currently available to stream.