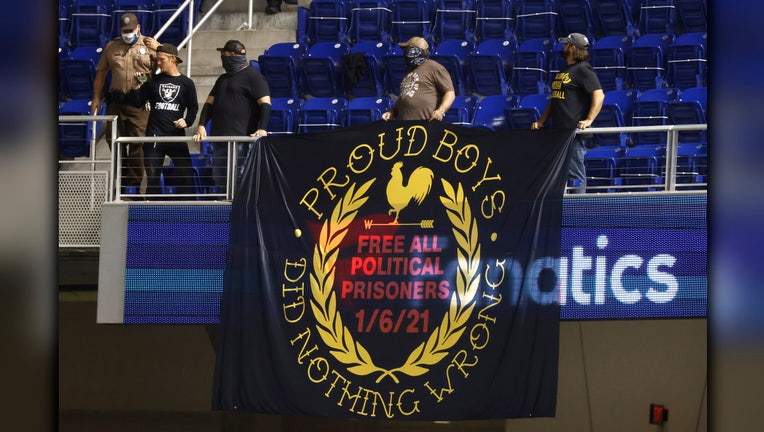 Fans display a banner reading "Proud Boys Did Nothing Wrong" during the seventh inning of the game between the Miami Marlins and the Colorado Rockies at loanDepot park on June 08, 2021 in Miami, Florida. (Photo by Michael Reaves/Getty Images)

MIAMI - Multiple fans were reportedly kicked out of the Miami Marlins game Tuesday night after they hung banners in support of former President Donald Trump and the far-right Proud Boys group.

Several photos from inside Miami's loanDepot Park showed the large signs being unfurled at the team's game against the Colorado Rockies.

One sign read "Trump Won - Take Back America" while another proclaimed "Proud Boys Did Nothing Wrong - Free All Political Prisoners 1/6/21" -- a reference to the date of the deadly riot at the US Capitol Building.

RELATED: Facebook suspends Trump for 2 years after oversight board ruling

A spokesperson for the Marlins told WTVJ in Miami that at least five people were ejected from the ballpark because the signs violated their rules on banners, signs and messaging.

According to the team's website, signage or banners are not permitted to be larger than 3 feet by 5 feet. They also cannot contain any language that is political, the guidelines say.