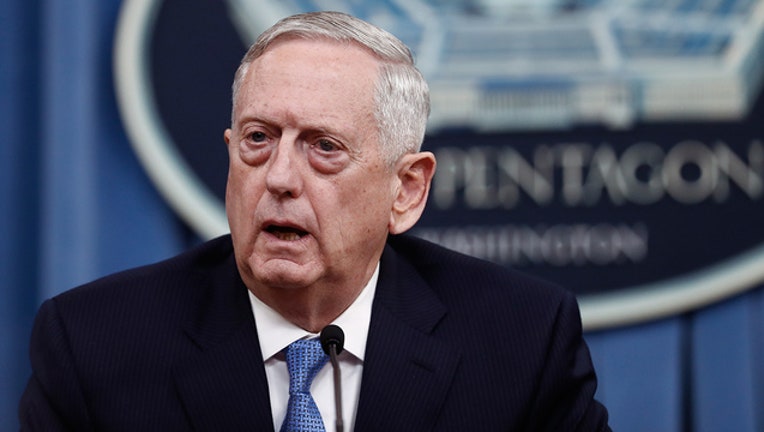 The retired Marine general, who quit in December 2018 amid policy disagreements with President Donald Trump, says he is concerned about the state of American politics and the administration's treatment of allies.

"We all know that we're better than our current politics," Mattis wrote in an essay adapted from his new book and published Wednesday by The Wall Street Journal. "Unlike in the past, where we were unified and drew in allies, currently our own commons seems to be breaking apart."

Mattis said the problem is made worse by this administration's disregard for the enduring value of allies, which he alluded to in the resignation letter he gave Trump on Dec. 20.

"Nations with allies thrive," he wrote in the Journal essay, "and those without them wither. Alone, America cannot protect our people and our economy. At this time, we can see storm clouds gathering."

In an apparent reference to Trump, Mattis added: "A polemicist's role is not sufficient for a leader. A leader must display strategic acumen that incorporates respect for those nations that have stood with us when trouble loomed."

Mattis is breaking months of public silence as he promotes his new book, "Call Sign Chaos: Learning to Lead," which is scheduled to be published Sept. 3. Next week, he is to discuss the book in an appearance at the Council on Foreign Relations in New York.

Without citing Trump by name, Mattis suggested the administration and its strongest critics are engaged in destructive politics. He said he worries more about internal divisions in American society than about external threats.

"We are dividing into hostile tribes cheering against each other, fueled by emotion and a mutual disdain that jeopardizes our future, instead of rediscovering our common ground and finding solutions," he said.

He said Americans must realize that their democracy is an experiment.

"Tribalism must not be allowed to destroy our experiment," he wrote.

A longtime colleague, Marine Gen. Joseph Dunford, chairman of the Joint Chiefs of Staff, was asked at a Pentagon news conference whether he agrees with Mattis that political tribalism in the U.S. is threatening democracy.

Dunford said he is careful to remain apolitical and would not make judgments about Trump. He said the military has managed to avoid politicization, despite a few lapses, during what he called "a very politically turbulent period of time" since Trump took office.

Regarding his reasons for leaving the Trump administration, Mattis offered a slightly more pointed explanation than he outlined in his resignation letter.

"When my concrete solutions and strategic advice, especially keeping faith with our allies, no longer resonated, it was time to resign, despite the limitless joy I felt serving alongside our troops in defense of our Constitution," he wrote.

Mattis, who had never met or spoken to Trump before the Republican president-elect interviewed him for the Pentagon job in November 2016, quickly became known as a leading voice of reason and stability in an administration led by an impulsive president unfamiliar with the tools of statecraft and dismissive of allies' interests.

Mattis resigned shortly after Trump announced he was pulling all U.S. troops from Syria. In Mattis' view this amounted to betraying the Syrian Kurdish fighters who'd partnered with American troops to combat the Islamic State group. Trump later backed away from his decision, allowing a portion of the U.S. force to remain in Syria in what the Pentagon sees as an effort to prevent a resurgence of the Islamic State group.

In his resignation letter, Mattis emphasized the value of allies and suggested that Trump had been irresolute and ambiguous in his approach to Russia and China.

Trump said after Mattis left Dec. 31 that the former Marine general had done a poor job managing the war in Afghanistan. He turned down Mattis' offer to stay at the Pentagon until February to ensure a smooth transition, instead telling Mattis to leave right away.